I had to have a pint in the pub, just to absolve my conscience for using their wi-fi for so long, so spent two hours on a pint and more internet. Back on board without any TV, I listened and watched a great deal of googie woogie on my phone, so in all I used about eight hours for free. My worst fears were confirmed about the Hungry Horse chain of pubs, owned by Greedy King. Although the beer was cheap, as was the food, the latter looked pretty dire and chips with everything. I had two pints of Abbot and could swear that the second one was not the same, even though it was a few hours between tasting the two. A chain of pubs to be avoided in future methinks.

There was considerable water disturbance this morning caused by Aldgate passing the moored boats at cruising speed. Although I was I was tied up securely with a spring line out, the boats in front and behind were severely rocked back and forth, hitting my boat from both ends. Aldgate was steered by Nick Wolf, who obviously has no consideration for other moored boaters. I reiterate my previous quote “Some souls are considerate and slow down when passing, but there are souls who do not.”

I made a move while the weather was good and was back in Braunston after a three hour trip. I watered up by the Elsan disposal and rinsed out my washing there, whilst talking to other waiting boaters. One man was hoping to empty his Elsan, but the disposal was blocked up. I tried poking it with a long stick, but no success, so I phoned CRT. The guy on the other end asked for these details:

Q Which canal are you on?
A The Grand Union

Q What is your name?
A Ray Oakhill.

Q what is the nature of the problem?
A Blocked Elsan disposal point.

Q What is the nearest bridge number?
A 91.

Q where is that?
A Braunston.

“Thanks you for reporting the problem. The area supervisor will be notified.”

30 mins later, I get a phone call from another CRT person, who says that they have despatched a person to Lock 51 at Hanwell to sort out the problem. For those who don’t know, Hanwell is just north of London! If I made this up, no one would believe me.

Whilst on the subject of CRT, I applied by phone for a 6 month licence in April 2016, that would last until the end of October 2016. When I finally get my licence plates to display, they are dated October 2017. Who are these people that CRT employ?

After winding Stronghold in the marina entrance, I pulled into a good mooring opposite the Marstons pub, where I found that I could get good free pub wi-fi and fairly good TV reception too.

I remembered that there was a Mikron theatre performance of The Canary Girls at The Nelson at 19.30, so changed and walked up there for a good evenings entertainment. The performance was on the bankside between the pub and the lock and was extremely well acted by just four actors playing several parts and also providing the musical entertainment, with each actor playing several instruments throughout the show. I had seen Mikron twice before, but with different actors and knowing this, I should have taken my own chair, but the performance was so riveting, I was in no discomfort. Nick Strivens was also there in the audience; he was in the Narrow Boat Trust for a while.

Having reserved a table at The Admiral Nelson to meet my daughter and partner for lunch, I changed and walked to the pub once again. 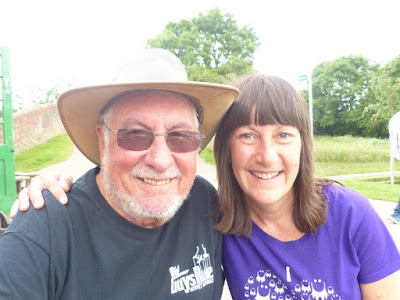 We meet up too infrequently.

We had a wonderful time and a good meal before repairing (I didn’t know it was broken!) to Stronghold for another few hours of good conversation. They left about eight pm in the rain, but they didn’t have far to walk to the car. 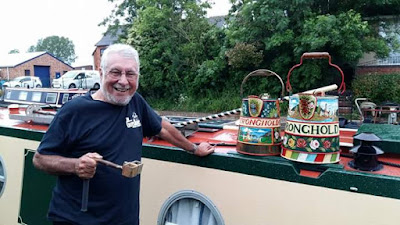 I had a wonderful time!

A knock on my boat was a welcome by Graham, the Harbourmaster for the event. I had known Graham for some years through membership of NBT and previous visits to Braunston Hysterics. Being the ‘new boy’, I was introduced to Chris and Linda as ‘The Gopher’ for this event. They were in the process of nailing up “No Mooring” signs along the towpath.

I had to do some essential shopping in the village, but on the way back, Graham and John had moved Joseph, Graham’s boat to a more conveniently placed  mooring in the marina and we unloaded the contents of Graham’s car into his boat. The remainder of the day was spent doing little jobs in the area.

Whilst writing this blog up later in the day, I spotted Maggie Young (another NBT member), with her friend Debs on the balcony of The Boathouse pub across the water. She generously bought me a welcome pint and we caught up on events.

Another BBQ on board of my last lamb chop. You may wonder if using a BBQ on board sounds dangerous, but this is a Cobb BBQ, which can be picked up and moved with bare hands whilst alight, so is very stable and safe. Ideal for use on a boat, but obviously only if used outside. 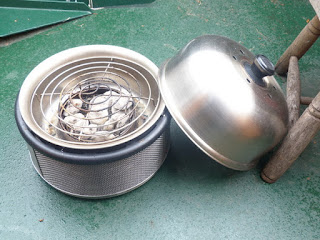 A late start to activities and not a lot to do at this moment, but I know that things will hot up as more boats arrive towards the end of the week. I followed Ian and Tina to the marina launderette, just to find out how things worked. Although I had been here many times, I unaware that there was a launderette here, as I had never needed one before. I discovered that Ian worked for CRT and they owned an historic boat called Holland, so we had a great deal to talk about. I walked up the cut to see it later and had a guided tour of the engine ‘ole, which housed a four cylinder Swedish made four stroke Bollinder. It had been heavily restored and looked beautiful. I was very envious, but realised that they had spent thousands of pounds on that boat.

Moored alongside was nb Owl with a Kelvin engine, owned by Jim Hutchinson, so I had a good chat with him too, So, despite there not being a great deal to do today, it was extremely enjoyable just indulging myself in historic working boats and boaters.

I have just discovered that I can download photos from my phone directly to this blog. how does that work? Previously I had transferred them to my PC using Bluetooth, which was very long winded. Wish I had know this before.
Posted by Oakie at 16:02