What a Bodge Up!

Just a couple of weeks ago I decided it was time to change my alternator drive belts on the two alternators. All went well until I pulled the port alternator too close to the engine and shorted out, very briefly, the live terminal against the fuel  pipe from the lift pump. The charging light did not illuminate and the basic voltmeter indicated no charge, until I revved the engine to maximum, which excited the coils and the battery showed a charging voltage, but nowhere near what it should be.

It was time to buy a new alternator, so I checked out the specialists in the Brighton and Hove and made a note of addresses to visit. The first one was an empty shop up for sale and the second address was a private bungalow. On visiting my local motor factor, it turned out that both businesses went out of business about two years ago. So what are they still doing on the internet?

Having ordered and collected a rebuilt alternator, I had just to remove the pulley from the old one to fit it – easy? Well, NO! With a belt wrapped around the pulley and gripped in the vice, it was impossible to undo the nut. I desperation, I took it to my friendly local garage, who said it could be removed easily with and air wrench – NO again! I could hear a lot of hammering and choice words muttered that I did not understand and eventually the manager returned  with the pulley removed and fitted. I was amazed to see that there was no key in the keyway and that the pulley, fan and nut had been GLUED in place and it had worked like that for 11 years! 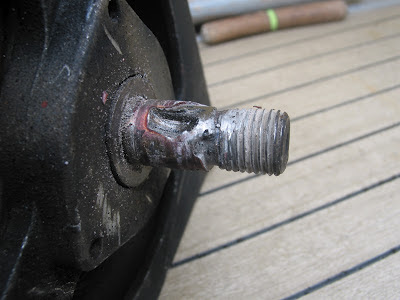 Back to the boat to fit the new one and the pivot bolts were put in, but the mounting end frame behind the pulley was the wrong shape and the tensioning hole for the strut bolt was in the wrong place, so more problems.
I decided that it could be worked around with a longer tensioning strut, but had no metal available or drills on board with which to do the job. Fortunately, my mate Richard, the diesel engineer was there with his van full of tools and even some suitable steel strip. He cut and drilled the pieces and I fitted them, which achieved instant success. Wires were reconnected and the engine fired up and all was right with the world once again.
Posted by Oakie at 20:10 No comments: