I met up again with Maffi and we both went for a meal at The Admiral Nelson and a few beers. We didn’t stop talking and laughing for three hours and had a very enjoyable time. In the meantime, the heavens had opened as forecast, but the rain was not as torrential as elsewhere. I passed a hairdressers on the way and on the spur of the moment went in to see if I could get a trim up. Sure enough, she could do it there and then, which was a bonus and would save returning later. It was another hot and oppressive day with no wind to cool things down, but also a good day for touching up the paint damage and a visit to the chandlery.

On the way to The Nelson later, I bumped into Graham Scothern, ex Chair of NBT and Harbourmaster for the Braunston Hysterics, as it is generally know around here. He welcomed me to his team and explained a few things that I was unaware of, as well as comparing notes on NBT matters generally.

A chilly start to the day, but the forecast is better for later on. I did get to the Braunston Chandlery this morning, but managed to buy nothing at all. I set off later and cruised my favourite part of the waterways, between Bruanston Turn and Napton Junction. Not only is it typical of Brindley’s winding contour canal, but it is so rural, with hardly a house or electricity pylon to be seen for many a mile. For a large part, it is slightly above the countryside to the north, which commands lovely views. 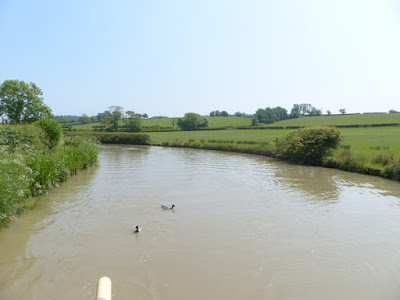 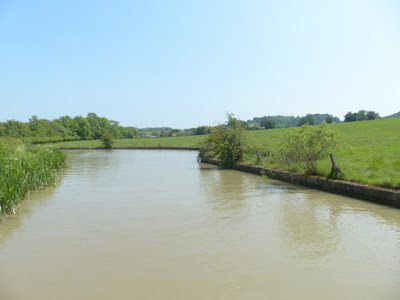 I turned north at Napton Junction and reached Calcutt Boats after passing through one lock. I managed to moor up stern first onto the wharf and the engineer came across to suss out the problem with the auxiliary alternator bracket. He explained that it had always been difficult to fit another alternator to the BMC 1.5 engine, because it was not originally designed for two alternators and the only really successful method was to have the engine out and weld an addition part to the front flange. Obviously this was above and beyond the lengths that I was prepared to go, so it is something I will have to live with. I fuelled up whilst there and had to make a declaration in the office when I went to pay. I had not done this for ages, as I very rarely buy diesel in a marina, so it was a bit of a surprise.

It was now very hot and humid and when I returned to my boat, I spotted another boat about to go down the flight. I hailed them and they waited in the lock for me. It was a Canaltime timeshare boat, with skipper Bob, his wife Wendy and daughter Anya. I decided to stay with them as far as Two Boats pub, again letting them enter the lock first, so as not damage my paintwork. Bob was a far more competent steerer than those on the last hire boat, so my paintwork was not in any danger. The girls worked really hard on the candlestick lock gear and we went down in record time, although time and energy could have been saved by using only one gate and one paddle at each lock. I insisted on buying the girls a drink for their effort at the pub, but churlish not to get Bob one as well and we sat outside talking about boats of course.

A cloudy start to the day and some light rain in the morning. I made the mooring more secure in the light of disturbance by speeding private boats – what is it with those guys? I’ll bet they all moor in marinas, so are not aware of on line moorers, but then they must moor up on the main line when out cruising. The best notice I have seen for them reads “Some souls are considerate and slow down when passing, but there are souls who do not.” - a subtle play on words. 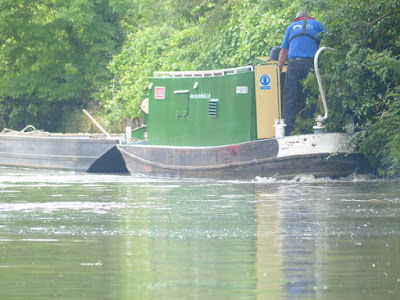 A CRT push tug stuck in the mud - he got off eventually.

I spent a great deal of time trying to email some material for The Steerer magazine using the BT Hotspot system, as I have BT broadband at home so why not use it. It is so unreliable, despite there being several Hotspots in the vicinity and I tried them all. In frustration, I resorted to my own mobile wi-fi, which probably used up all my months allowance in one go, considering how long it took to upload a few photographs and text.

Feeling cabin fever approaching, I decided to walk to the village via a footpath across the fields and very pleasant it was too, being well away from the busy road. There are four pubs there and I settled for the Buck and Bell close to the village green. Only one other customer in there and he recommended the beer, which was very welcome on another humid day. I returned via the main road – big mistake, it being noisy and very busy.

I found a little shop close to the pub on the housing estate, but the choice of goods was extremely limited. I managed to wind the boat in front of the pub before any customers appeared and I then moved up two locks to The Blue Lias, mooring outside with a view to using their w-fi. The water point was opposite, so I filled up there first.
Yet another pub without their own wi-fi, but I was hoping the BT Hotspot would connect. I was to be disappointed. My phone connects OK, but then that is more up to date at less than a year old. The PC just would not connect to the BT Hotspot and my personal wi-fi could not get a phone signal, so out in the desert yet again. I have to say the same about shops too; very few and far between, so it was a good job I stocked up at the butchers in Braunston a few days ago. I will have to repeat that experience when I return, as I think his dry cured smoked bacon is the best I have tasted and no water comes out of it when fried.
There is a wedding reception going on here and after the formal group photograph, several guests wanted their pictures taken against the side of my boat – could have earned some beer money there! The disco started at 20.30 and finished at midnight – not too obtrusive really.

I moved across to the water point to rinse out my washing before moving up to the lock landing. Just as I opened the gate, a boat came through the bridge ‘ole. When we were both in the lock, who should appear on the side of the lock, but Bob, my locking friend from a few days ago. He accused me of pinching his place in the lock, as his boat was behind, which I did not realise at the time. We ascended Stockton Locks in short order and parted at the top, as I paid another visit to Calcutt Boats for a couple of Thackery Washers, which they could not supply, but suggested Allen screws, which are even stronger than high tensile bolts. They didn’t have those either.

It had been drizzling all morning and the rest of the day was showery. I turned right at Napton Junction, heading for Napton. A pleasant little trip with no locks. Passing Napton Bridge Inn brought back memories of long ago. Sadly, it looks closed again.

At Napton, I winded the boat and reversed on to a mooring, with a little difficulty, as other boats were coming both ways. I ran onto the mud and let them pass, before trying again with better success. After emptying my rubbish, I had a very nice pint of Shagweaver in The Folly. They also had good wi-fi, so it’s back again in a minute to post my blog at last. Oh yes Barry the statue of Venus is still there!

Blog now posted after four days in the wilderness. I also mentioned the Sunday cheese feast to the barmaid and she said it is on tonight - say no more! As long as I can keep awake, that is.
Posted by Oakie at 18:42