Barry took the header tank to his welder after cleaning it up further and finding two more holes. 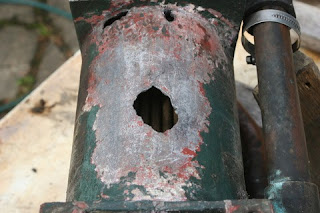 The bottom of the tank was paper thin in places and this was cut away by the welder and a 6mm piece of  aluminium was welded in place, with a boss for a drain plug in addition and what an excellent job he made of it too. The tank was further cleaned out with descaler and the tubes cleaned out with an extended drill bit, before flushing out what was left. 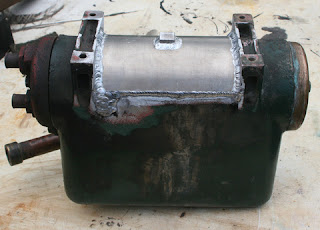 (All photos by Barry Adams)
All that remains to be done now, is to bolt it back in place for the next trip to load up with coal for the NBT Summer Coal Run.
Posted by Oakie at 13:52 No comments:

I had visited this rally two years ago with the Narrow Boat Trust and had thoroughly enjoyed the occasion, even though we had a mooring next to the Elsan disposal point. This time, however, we were moored just above Butcher’s Bridge, between the two entrances to the Braunston Marina, which was much more salubrious and closer to the action.

﻿﻿﻿﻿﻿﻿﻿﻿﻿Barry and I arrived on Thursday before the event, as there was some work to be done on the boats, most of which was completed the following day. We booked in and had a chat with Graham Scothern, the harbourmaster.. We strolled around the marina and I happened to see Kevin and Ingrid from nb Columbia, who are live aboards, usually in the Thrupp area. I was introduced to them by a mutual friend in The Jolly Boatman at Thrupp a couple of years ago. At the same time, Jan and Frank appeared from their boat, Havoc II  in the marina, so they also stopped for a chat. I had met Jan on one of my Basingstoke adventures last year and was aware that they had a boat here. On the way back to the boats, I bumped into Geoff  Holman and found that he was staying on nb Crane with a mate. I had met Geoff last year, also on the Basingstoke on his boat Finch, where we did a few locks together. There is nothing like mutually doing locks, to make friends with other boaters. Suddenly, the whole atmosphere had become a very sociable occasion for me and I felt very much at home.


After a very good meal on board, we repaired to The Admiral Nelson.  I always get muddled with the name and sometimes call the pub The Lord Nelson, but as someone pointed out, he was only an admiral when the pub was built. We met up with Geoff and his captain and had a very pleasant evening.


Friday was a working day, but a gut buster breakfast (for Barry) was in order first at The Gongoozler, a floating restaurant by the marina entrance. After which, various tools were collected from the car to replace the cabin door lip on the motor, which had caught on a bridge ‘ole when trying to hold back the butty the weekend before. It was a case of another bridge that was too low for the butty, or was the butty too high for the bridges?   The prepared piece of iroko was screwed in place and given a coat of red oxide paint in the absence of any primer, but looked fine as it more or less matched the other paint on the door.

Cloths were partly removed from the butty and it was tidied up in readiness for visitors. I walked up to Braunston Chandlery to get a new cabin shaft and enjoyed browsing around the shop, as always. After a meal of lamb tagine, that I had cooked just for a change, we took another walk to The Admiral Nelson, just to make sure it was still open! This pub, although right on the canal at Lock 3, is very popular with boaters in the summer months, but does not attract much attention in the winter, as it is so far out of the village. In consequence, it frequently closes and then re-opens in the summer with a new landlord or tenant. I have to say that the present owners have done it proud with pleasant staff, well kept beer and attractive food. I wish them luck for the future.

Saturday dawned and the forecast for the weekend was promising. Very shortly, Steve Smith arrived with Jennifer, along with the Lapworth family, so in good old English tradition, tea was served to all. I should explain here that Alice Lapworth is an NBT member, who is part of a very well established boating family, being born on a narrow boat. Her brother-in-law Tom, has been a boater all his life and always self employed; his last venture being a tug owner, which did a lot of work on the Windsor Flood Relief Programme a few years ago. He was accompanied by his wife Maureen and Jeanette Smith-Harrison, who had brought along a very interesting collection of photographs of her boating ancestors. Colin Wilks, our newest member, was also welcomed on board. Colin has been with Friends of President, the steam narrow boat paired with Kildare and owned by the Black Country Living Museum. He thought it was time for a change and brought considerable experience of boating with him, which is very welcome, as well as being a beer drinker and  laughing at my jokes, so needless to say we all clicked immediately.

The boat parade was due to begin at 11am and we squeezed into a suitable space in the procession about 12 o’clock, with Tom Lapworth steering the motor and Alice steering the butty. As usual, progress was very slow and we were often at a standstill waiting for boats ahead to wind at Braunston Turn. Now I should explain that this turn is unique on the waterways, as it is formed by a triangular island in the centre of the junction with a foot bridge over the top. To turn (wind) the boat, you steer up one side of the triangle, then reverse down the other side, by which time the boat is facing back the way it came. Doing this on a single motor boat is not easy without hitting the sides, but completing the manoeuvre with a pair of boats on cross straps is a work of art. However, Tom and Alice demonstrated that art, born out of years of boat handling practice. What we all found incredible, was that Tom on the motor, could make the butty boat do whatever he wanted and to say that we were in awe of his expertise, is rather an understatement. 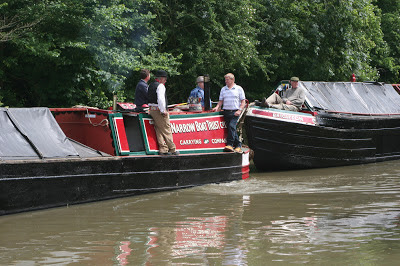 On the parade. (Photo by Barry Adams)
The parade took us 3 hours, which is par for the course, so we were back on the mooring by 3pm and spent the afternoon drinking tea and chatting to passers by, one of whom was Chris Iddon from nb Merchant, with his latest squeeze, Catherine or is that Katherine? We had met on a couple of occasions last year and I had heard about his new girl friend on the towpath telegraph, even down south, which he appeared rather surprised about. He is now only working weekends and his boat is moored at Staines-on-Thames, as it is now officially called! No doubt his fuel business will be full time again as winter approaches. You have to love the life to cope with selling fuel on the waterways, as there is no way you will make a fortune, just a living.

I was looking for photo opportunities under Butcher's Bridge, when someone pointed out a family of mink under the opposite bank. It appeared that the young were in the nest and making a lot of noise, but did not dare venture out. Sure enough, a little later, the parents returned swimming back to their hideout. As someone suggested, a 12 bore would put paid to all of them at the same time.


Once again, we made tracks to the Nelson and met up with Jeanette again, as well as David Blagrove, another NBT member, who delights in telling tales of his past to a very attentive audience. Needless to say, a fine night was enjoyed by all. 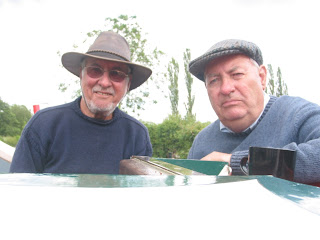 David and myself on a previous run.


Another fine day on Sunday and this time we were on the 2pm parade. I was rather anxious to get away early, as there was a lot to be done before we went home and I was doing the driving. Consequently, we were first in the parade and completed it in an hour – unheard of! As before, Tom and Alice were steering and demonstrated to all how it can and should be done. There were less gongoozlers than on Saturday, which I found rather surprising – maybe Wimbledon was keeping them at home. 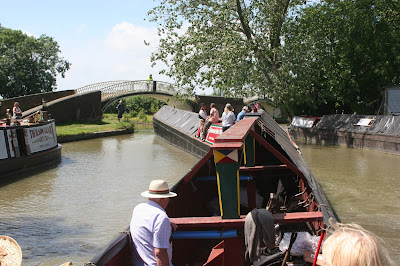 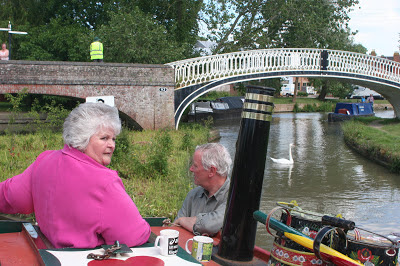 Moving the butty over at the apex of the triangle. 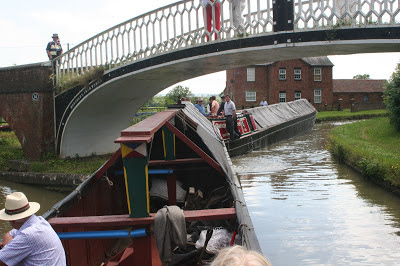 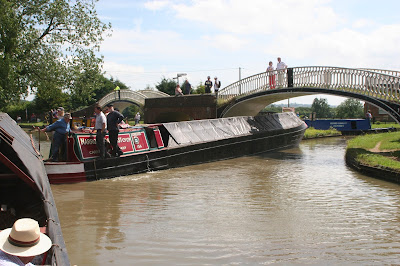 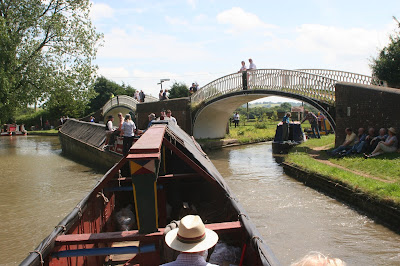 .......until we can straighten up - job done!
(All Braunston Turn photos by Alan Cummins)


Back on the mooring, final cups of tea were drunk, before our visitors departed. Meanwhile, I went off to the marina to get something to eat and when I returned the header tank was on the towpath, much to my surprise, as this was the job that had to be done before Barry could take it home for repair.  There was much doubt amongst visiting boaters as to whether the casting could be welded, but Barry was optimistic after having a word with his tame welder. As can be seen below, it was possible even though the patch was larger than expected. Another header tank was available on the internet at £450, which is a great deal more than £60 for repair! We clothed up the butty to keep out any rain and drove off about 5.30pm – far earlier than I expected, but met up with all the traffic exiting from Silverstone, so detoured through Stoke Bruerne to the M1, which was also very busy, but we kept moving and I got back to my boat about 7.30pm after an exhausting, but very enjoyable weekend.

An excellent video by MrGig2010 can be seen here.