For some time now I have been thinking about the engine air intake in the hull, which had a rather poorly constructed wooden baffle glued to the inside of the hull.
When investigating this recently, it came away in my hand and on further inspection I decided that it was just not good enough.
With a view to navigating the tidal Thames later in the year and reading about the narrowboat that sunk recently, the time to replace was now, although my intake is well above the waterline and Stronghold had not been replated like this one:-

Using a cereal box, which I had to hand, I marked out the sides and face of the baffle and sellotaped them together. I could now offer this up to the rectangular hole in the hull and confirm that it would fit. 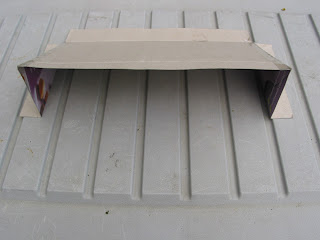 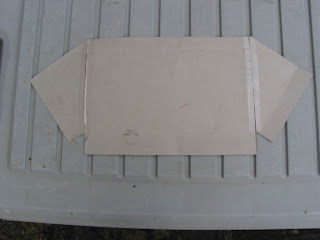 The shape was then marked out on a sheet of 18g aluminium and cut out with a jigsaw. The corners were bent at right angles using a vise and mallet.
﻿

It was now ready to be glued to the hull with a contact adhesive. Using any other type of glue would necessitate clamping in position and this was clearly not possible. I am always reluctant to drill holes anywhere in the hull, so adhesive was the only other way.
﻿
Some slight adjustment was needed as the hull had a gentle curve at the point of fixing. Eventually the adhesive was applied to both surfaces and left to dry before pressing the aluminium into position. The corners were then sealed inside and out with silicon, adding further strength to the glue. Even if there were a few gaps in the sealant, only small amounts of water would get in and I would feel much more secure cruising down to the Thames Barrier through the wash of those Thames Clippers.
Posted by Oakie at 14:40 No comments: