Back to Stoke Bruerne

It was time to make a move back to Stoke Bruerne. The boat club gang of four were at the bottom of the Stoke Locks at 10.00. I just had to water up first at the junction and wash off some of the blossom that had been blown on to the boat overnight by the strong winds.

Back through the tunnel again to arrive at Stoke at 13.00 and slot into a very convenient mooring. Although I would need to turn the boat around to retrace my steps, now was not the time when a space was free. 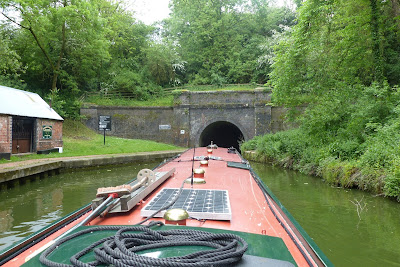 North portal of Blisworth Tunnel with the leggers hut on the left.
This is the third longest canal tunnel in current use at 1075yds long, which is close to one and three quarter miles. Opened in 1805, after abandoning the first attempt to dig through quicksand. There is an addit about 400yds in from the south end on the right, through which light can be seen from the original tunnel. It normally takes me 35mins to pass through; boats coming the other way tend to slow progress. However, Jules Fuels pair, fully loaded have done it in 17mins with a clear run.

Greetings over, Mick and Terry were in the process of removing the hot water cylinder from Barleytwist, which had sprung a leak. Terry eventually managed to get a taxi to take him and Mick to Midland Chandlers at Braunston to get a new one. With the cylinder in place and a few fittings on, we all adjourned to The Navigation for an evening meal, which started off badly with prawn cocktails in which the prawns were still frozen. I can’t say much in praise for the rest of the food either. It was just the same as every other large chain pub. Had Mick and Suzanne been fond of Indian food, we would have eaten well at The Spice of Bruerne. 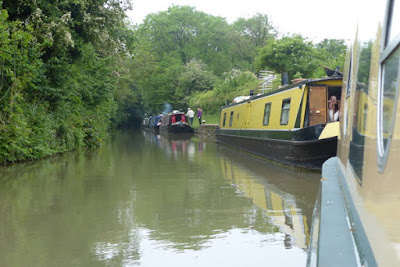 Stoke moorings looking towards the tunnel. 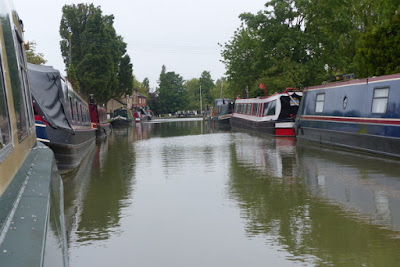 Work continued on refitting the hot water clinder, cannibalising fittings wherever possible, until they came to an end, so Kathryn took Terry off to B&Q in her car so that the job could be completed. After many attempts to bleed air out of the system, it was working and we went to The Boat for lunch and a celebratory drink. 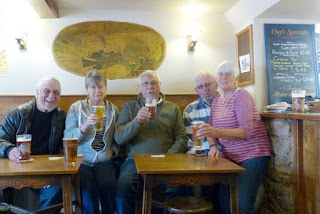 Celebrating in the boaters' bar.

About 16.00 I winded the boat in front of The Boat Inn and set off back through the tunnel, aiming for Bugrooke once again, where I found a mooring at 18.00. I sampled the beer in The Wharf Inn, which was surprisingly crowded, but then it was Friday night.

Note. I include times for any future travelling plans.
Posted by Oakie at 16:06