Here I am again blogging for the sake of friends and family about my summer cruise to various boating festivals on the canal system, starting with Canalway Cavalcade at Little Venice in London. For a change this year some members of the Byfleet Boat Club are also attending along with me.

I left the moorings with Brian and Margaret on nb Zavala, with a view to travelling as far as Kingston, which is only just over a mile from Teddington Locks. We had an uneventful trip, passing Still Rockin’ with George and Carol waving as I passed them just upstream form Sunbury Lock. I also locked through Thames Ditton with Chris on nb Merchant, but did not have a chance to converse with him. At the same lock there were a lot of EA staff in yellow jackets about to evict some permanent moorers on three boats, all belonging to the same person. I was not sure where they were going to evict them to.

Mooring up on the Barge Walk, we had a very pleasant evening meal in Cote Brasserie, where I had eaten before, so knew that it would be good and I have to say that the Zavala crew agreed with me.

The other BBC boats stayed the night at Hampton Court Palace moorings and we will meet up at Teddington for the locking through at about 16.30 on Thursday, heading for Brentford Locks and the entrance to the Grand Union Canal. Unfortunately, that is the time of high water at Teddington, so we have to wait until then for an easy passage to Brentford on the ebbing tide. 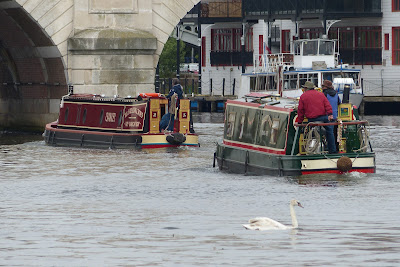 Cranley and Barleytwist about to pass beneath Kingston Bridge.

It has been some time now since my last blog post and as I stated then, I would sum up the cruise – the highs, the lows and the scary bits.

In all, I did 761 miles and 536 locks, but never achieved my previous record of 40 double locks in one day, but there was no need on this trip, as one thing that I dislike on any cruise is the necessity to get somewhere by an appointed time.

Probably the highest point was the Thames Barrier Cruise with Andrew Phasey and the St Pancras Cruising Club. This was enhanced by the photo of Stronghold against the Barrier taken by Simon Judge. See Stronghold on Tour 9. 18th May.

Another high point was steering nb Nuneaton, with Brighton in tow, on the Braunston Historic Boat Rally parade. Part of this trip was recorded on You Tube https://www.youtube.com/watch?v=Gzv_j5Gcuaw&t=7s
I was particularly pleased with my performance steering the pair of boats on this occasion, not having steered them for well over a year. At the same festival, I volunteered to steward for the first time, that being the only way possible to get a mooring at Braunston. The one disadvantage being that I was new to the crew and was tea boy – not next time though.

Climbing Bingley Three Rise and Five Rise was an ambition last achieved way back in the early eighties, when we descended on a hire boat, so I have now been up and down the staircase locks.

The best town mooring was definitely at boat welcoming Skipton, where there were plenty of towpath moorings available even at the height of the season.

The most scary event was not being able to connect with Keadby lock keeper on the radio when approaching on a fast ebbing tide. Fortunately, I had his mobile number on my phone, which roused him from whatever he was doing. The alternative was to continue towards the River Humber and try to find a place to moor – not an exhilarating prospect.

Another scary moment reflected in hindsight, was at Boseley Locks, where I fell off the steps leading from the cabin top to the back deck, via the battery locker. Twisting from the left hip with that foot on the top step, caused my arthritic hip to give way, which in turn put me face up on the stern deck. I later realised that my leather brimmed hat was on the gas locker with the rear brim bent sharply up touching the crown of the hat. This had obviously saved my head from a severe cut on the steel corner of the gas locker. Fortunately there was another boater further up the flight who saw the whole thing, but apart from a bruise on the back of the head and a cut on my arm, I was OK. This is not the only time that a leather hat has saved my head. A few years ago on the coal boats, I was taking tea up to the motor steerer from the butty back cabin, via the planks, which were at gunnel level. I had to swing around the box mast to get past the cratch to the gunnel between the boats, rather than on the outside of the pair. My arms were wrapped around the mast when I popped my head up above the cratch at the same time as we were passing under a very low bridge. My head caught the brickwork above and once again my hat took the brunt of the blow. Fortunately I was not knocked into the empty hold 4 ft. below. Since the second time in Boseley Locks I have designed and made a handhold that will fit through two U shaped devices screwed to the stern door, which is always clipped back when on the move. This gives me improved confidence and balance when descending off the cabin top at the bottom of a deep lock and has made a vast improvement to working the boat. 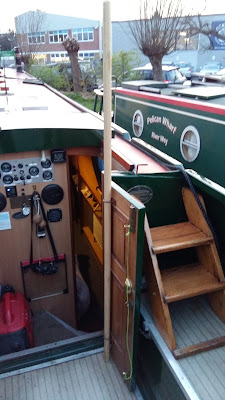 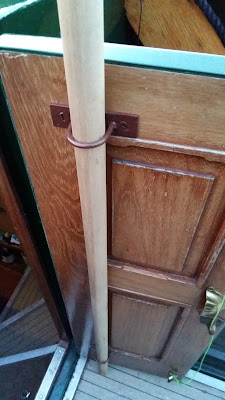 That then is the long awaited resume of my trip in 2016, after which I had another hip joint replacement so that I would be ready for another summer back on board.


Shortly afterwards, both Kathryn Dodington and I were awarded the Herbie Award for the year for Indefatigability after both having hip joint replacements.
Posted by Oakie at 16:22 No comments: