Rather a lot of material in this post, for the simple reason that I appear to be in the desert with no Wi-fi available anywhere

It was time to move on again as far as Weedon. I had run out of food, apart from an emergency supply of tinned meatballs, vegetables and pasta spirals, which would do for two meals. A very pleasant few hours cruising in warm weather and no wind for a change after the last week.

Good moorings to be had just below Bridge 24, with easy access to town shops and pubs, although the Tesco Express was limited for choice. Walking down the High Street, I suddenly realised that I had been here before, but in a car passing through. But no, I remembered Concoform Marine boats from way back when they had a hire fleet at Weedon in the ‘70’s and walking down to the canal to see the yard where they were built. Another thing comes to mind and that was a large notice the yard had erected at the time, which was addressed to anyone thinking of buying one of the new apartments opposite. It said, “This is a working boatyard and we make a lot of noise when working. If you are not going to like that, then think seriously about  buying an apartment opposite.” Obviously they had had complaints about the noise from residents.
There is still a working boatyard here, but I don’t think they build boats any more.  The only commercial sign on display is Bosuns Locker Self Storage, but when I Googled that it came up with Concoform Marine, so the company is still in existence. 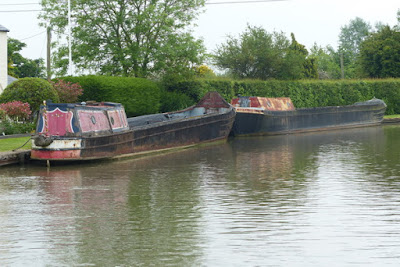 Butty Balham and motor Edgware moored near High House Wharf.
This pair have been deteriorating here for the past ten years, to my knowledge.
How sad is that?

On the way back from Tesco, I had a chat with two boat owners and was deploring the lack of decent pubs close by. They described two decent pubs in Weedon Bec, which is just a little further back, so I paid a visit to The Malsters Arms, which is a free house and friendly local, but no food. I was advised to try the Plume of Feathers close by, where they did genuine home cooked food. I had a word with the chef about Jerk Beef Stew, which was on the menu, but unfortunately sold out. She found the recipe in the internet and it is one that I must try back home. Not on board, because there are too many spices involved, most of which I have at home already.

Walking back, I passed by the old Royal Ordnance Factory, so stopped to take a look. This was really interesting to me, so I took a couple of pics. Built in 1805 and used for storage of gunpowder in the Napoleonic War and later, it is now being converted into several commercial properties. Of particular interest is that it was originally connected to the Grand Union Canal by an arm that went through a portcullis gate right into the factory. The unfortunate part is this has now been cut off by the West Coast Main Line and the remainder filled in with a housing estate built on top. The entrance to the arm from the main line is now a small marina and part of the Concoform boatyard.
More detail and pictures here:-  http://www.subbrit.org.uk/sb-sites/sites/w/weedon/index.shtml 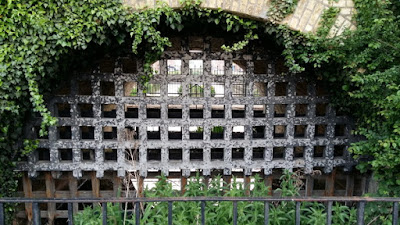 The wooden portcullis in the gatehouse. 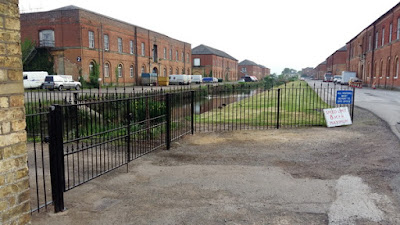 The canal through the centre of the magazines.

I have a free BT Hotspot connection here, so am making the most of it. Hot and sunny weather is forecast for today, but we didn’t see any sun until after midday. Most of the morning has been spent researching and typing this account up. I still need more shopping and I have some serious scratches on the hull to touch up while the weather is good. The canal is really busy here now that more noddy boats are being hired out from nearby bases and surprisingly, they are the ones that pass by more slowly than privately owned boats.

Topped up at Tesco again and had a cheap pint at The Heart of England, a Marstons house. Nothing wrong with the beer and wi-fi, but the food looked dire and smell of burnt food from the kitchen was enough to put me off eating there.
I had another look at the scratched paintwork trying to remember where it had occurred, until I realised that it was marked with the blacking from another boat, so not my fault at all. I tried removing it with a Garryflex fine abrasive rubber, but that removed the gloss from the paint all the same, so it still had to be touched up.

Another hot day in prospect. I chatted with a lady from the hire boat moored behind me and discovered that they were going to the  Watford Locks. They had not done any locks since leaving Gayton Marina and were rather unsure, so when I said I wanted company up the Whilton flight, they were only too happy to accompany me. There were volunteer lock keepers there anyway, so I did very little except to offer advice and I didn’t raise a paddle until the top lock. Despite not breaking into a sweat, I needed a pint at The New Inn and was just about to order, when Paul offered to buy me a pint for my trouble – thank you Paul, but I don’t think I earned it. 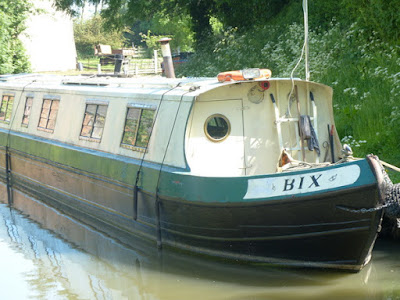 I met the people who owned this boat in 1979 and still have a cookbook published by Iris Bryce, which we bought from her on that trip. Now moored just north of Weedon.

I like the moorings at Long Buckby (if one is available), having moored here so many times in the past; the only drawback is that cars driving too fast along the adjacent dirt road raise a lot of dust – not the place for a BBQ, or touching up the paintwork, so that can wait another day. One thing that was overdue, was an oil and filter change, so I put that in hand instead.

Time to post my blog, so walked to The New Inn with my laptop and bought a pint before asking for the wi-fi code............... THEY DON’T HAVE WI-FI!!!   I know they used to, because I remember watching one episode of a BBC series here. I think this must be the first pub on this trip without wi-fi – useless! Even more than useless is the service on a hot day, with only one woman serving behind the bar and people waiting for ten minutes to be served.  Not even a BT Hotspot within the locality – I must be in the desert.

As usual, I left late for Braunston after checking the engine oil level and topping up. Strangely, the oil level has not dropped below the full level on the dipstick this trip, which makes me suspicious about diesel leaking into the sump again through the injection pump seal. A close eye is being kept on it.

Through Braunston Tunnel in 25 mins and far less wet than Blisworth, as is usual. There was a queue above the Top Lock and I eventually went through with a noddy boat, crewed by three men and two women, the latter doing nothing except stop at the locks and talk to people. One lady actually had a windlass, but I never saw her use it, so we had to wait for the guys to close the gates after we were out and then walk down to set the next lock. It took them ages to get the boat squared up in the lock and to one side, so I didn’t dare make a move until then. I did suggest that they stop the boat on the centre line round a bollard, but they were not open to advice and carried on making a dog’s breakfast of the business.

I found a convenient mooring on what I suspect is normally a Union Canal Carriers mooring, but there were no notices, so I tied up securely for the night. Looking around for a Wi-fi connection, I was delighted to discover Braunston Marina open connection, until I found out later that it had to be paid for. It was either that or hump my laptop to The Nelson and use theirs, so I opted for the easy option and paid £3 for 24hrs/500Gb..I have to say that is is not very satisfactory and keeps dropping out, so I'm pleased that I didn't opt for more time.

Having done this and about to publish this blog, who should walk past but Maffi, with Bone’s dog Boots and Molly of course. We spent time gassing and joking, both being pleased to see each other after so long – probably two years. I asked him to give me a knock if he was going to The Nelson later.

Another hot, windless and oppressive day, with heavy showers forecast, but nothing yet at 5pm.
Posted by Oakie at 18:06