Ever since I bought Stronghold, I have had starting problems with the BMC 1.5 engine as soon as the weather starts to get colder. Despite trawling the internet and all relevant solutions offered therein, nothing seemed to work. As most BMC owners will know, you are advised to clean out the carbon from the hole where the heating element fits, but no one stresses just how important this is to solve starting problems. I had changed the heater plugs a couple of years ago and there was a minor improvement after attempting to clean out the hole where the element goes in with an 11/64 drill. However, this is difficult to achieve for several reasons:-

1. It is almost impossible to twist the drill with your fingers and putting it in a drill chuck with a heavy drill on the end, risks breaking the drill off in the engine block, with dire consequences.

2. Holding the end of the drill with pliers is extremely awkward, because the injector pipes get in the way of the pliers.

3. The drill needs to go right into the hole, leaving only 3/4 inch protruding from the block, which leaves very little left to hold.

Having just acquired a lathe, I decided that a drill soft soldered into a ½ inch diam steel rod would give me something to grip with my fingers. Better still, a 5/32 and then an 11/64 drill would enable the carbon to be removed from the hole in smaller quantities, so making the tool easier to turn by hand and if it was knurled, much easier to grip with the fingers. So I made up the tool illustrated. 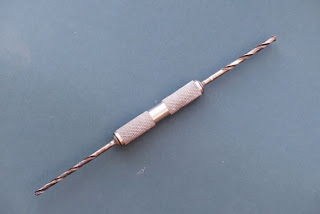 I checked that the removed heater plugs were working, using one of the batteries, before reaming out the carbon in the element holes, smaller drill first, with a little grease on to contain the carbon. Even though the tool is quite long, it did not impinge on the injector pipes. Had it done so, I intended sawing it in two.

The heater plugs were replaced in the block, with some copper grease on the threads, and re-connected to the circuit. Now came the moment of truth. The ambient temperature was about 10 deg C. The heaters were switched on for 30 secs and the throttle set to half open. Imagine my delight and surprise when the engine fired up immediately!

I think this is now going to be an annual ritual before winter sets in.
Posted by Oakie at 17:55 4 comments: