Well, that turned out to be quite a night in The Folly. As I went in, the table was being set by the guy who bought the cheese. I bought a pint of Old Hooky and sat alone at a table, making use of the wi-fi. A man was collecting chairs to go around the cheese table and was about to take the one on which I had my coat. It was then that he invited me to join them, which of course I accepted. Just as last time I did this, the table had many types of cheese, along with pate, chutneys and pickles and several varieties of bread and biscuits. The difference was that this was more formal, with places set with plates, serviettes, and knives. Conversation was difficult to start with, but gradually warmed up as the alcohol took effect. Around the table were a boater, a farmer, the local postmaster and the brother of the farmer who restored the pub in 1986, after it had been closed since 1946. This is the farmer who I spoke to in the pub at that time, just after it had re-opened, when I was cruising through on a hire boat. I mentioned this to his brother and he recounted the history of the restoration. There were no ladies invited. Soon after we began eating, a bottle of port was shared amongst the invited guests and the conversation loosened up even more. Other locals were invited to the table as they appeared through the front door. After a while the plates were cleared and the party broke up, but I moved to another table to join some boaters for more conversation. Upon mentioning the Narrow Boat Trust, one woman said how she did not like that group of boaters. Upon asking why that was, she went on to explain that they always wanted to turn the lock around to bring the butty through, without asking anyone else waiting. In fact it was worse than that, the captain told the waiting boaters that that was what he was going to do! When questioned further, she did say that it was a few years ago that she experienced that belligerent behaviour. Any members reading this will come to the same conclusion that I have, knowing who that person was.  I am pleased to say that we always ask permission before turning the lock nowadays and rarely does anyone object.

It was another cloudy, but windless day and I decided to walk up to the post office/general store before it rained to get some money. I had asked the postmaster previously if that was possible, to which he told me to get there before 10 a.m. as the BT engineer was due then to repair a fault. It was half a mile uphill and turned out to be a shop with a very comprehensive stock of most things, even down to baking their own bread and having a coffee shop on the premises. It was also busy, being the only shop for miles around. I think that everyone I passed on the way there and back bade me “Good morning”, which made the walk all that more pleasant.

I am now moored here on my own and it is drizzling once more. I have a choice of things to do. In the rain, I may as well try fitting the LED strip beneath the galley lockers. If dry, then walk up the Napton flight to try and fish out the Dunton windlass that I dropped in two years ago. As it had now stopped raining, the option was obvious and I knew that if I didn’t try now that I was so close, I would regret it. I set off up the flight armed with Sea Searcher magnet and length of line. I was very sure of the spot, even though there was new piling where I had dropped it. I allowed myself two hours to dredge about 50 yds. Time went fairly quickly as people stopped to ask what I was searching for – how to meet people and make conversation in an afternoon. Although I did drag up a galvanised steel windlass with rotating handle, mine was elusive and probably buried in the mud by now, or it had been found by the piling crew.

A quick visit to The Folly to use their internet and it was back on board for a meal. I have to make a move tomorrow and plan to moor on my favourite stretch of canal, miles from anywhere for a change. 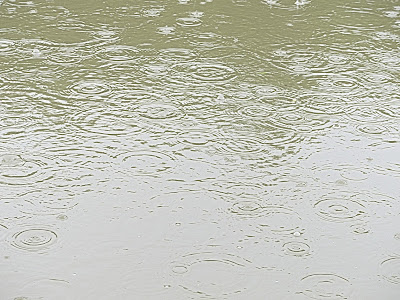 Not much to relate about today, except that I stuck to my plan and did moor up out in the sticks along with a few other boaters who had the same idea. The weather was kind to me whilst on the move, but about 14.00 the rain began and was incessant until early evening. At that point I decided to BBQ my last butterfly lamb chop with new potatoes and sweet corn, with BBQ banana, runny honey and cream – divine!

I was now down to the last of my food supplies, so it has to be the Braunston butchers again tomorrow to stock up. When I was there last, I said I would see him again next year – looks like I will have to eat my words. 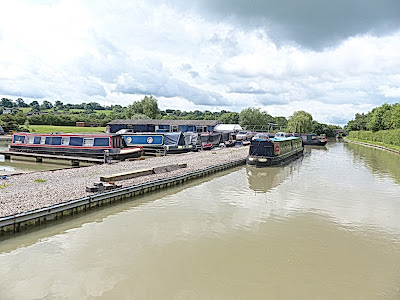 Napton Marina - scene of a broadside attack on their hire boats
by an out of control loaded butty a few years ago.

It only took just over an hour to get back to Braunston. It rained most of the afternoon, so I holed up and tried to get a TV signal – totally useless again. I had run out of food and was not going to get soaked walking up the lane to the village, so when the rain cleared I walked up to The Nelson and had a meal there, as well as booking a table for Sunday lunch, when my eldest daughter was due to visit. 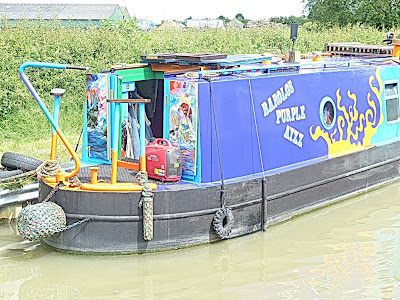 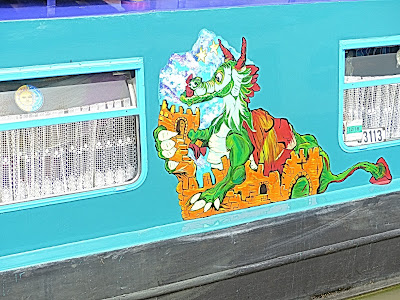 I promised that I would go and pay Tim Coghlan a visit to thank him personally for sending me an article for The Steerer magazine, whilst on his honeymoon! I also pointed out his faux pas in one of his previous articles that said the Narrow Boat Trust pair Nuneaton and Brighton were both built at Yarwoods in Northwich, whereas Brighton is a Large Woolwich built by Harland and Wolff Ltd in Woolwich.

I had overstayed my allotted time on this mooring, so had to make a move. On coming to The Boathouse, a Marstons pub, I remembered that there was free wi-fi there and also a convenient mooring opposite. I pulled in just to see if it would work from that distance and sure enough, it did, so I finished off typing and posted it on the internet. I was wondering why the pics were taking a long time to insert, but then found they were still 2Mb in size. Normally I reduce them to less than 200kb - slipped up somewhere.

I found this on an IWA bulletin yesterday:-
“Tom Henshaw
We also regret to announce the death of a  Midland’s campaigner Tom Henshaw on 7th June.  He was a member of the old Midlands Branch committee and editor of Navigation but well-known for the founding of the Ashby Canal Association and Ashby Canal Transport to keep narrowboat traffic going by establishing al coal carrying operation and running camping boats.  Latterly he was president of the Ashby Canal Association.”

Although I never met Tom, he was the president of the Narrow Boat Trust and was somewhat of a legend in the fifties, when commercial boating was in a serious decline. I emailed David Blagrove, who was also engaged in the coal carrying business at that time to ask if he would write a tribute to Tom. David has made several valuable contributions to The Steerer in the past and is a wealth of knowledge about the waterways and it’s history.
Posted by Oakie at 12:48