After a chilly night, we awoke to wall to wall blue skies for a change, after so much rain in the past few months. Fires were smoking and engines fired up for a 9am start. Jeff lit the burner to heat up the hot bulb on his Petter and after about ten minutes it was ready to kick over and fired up straight away.

We cruised slowly up to the first of the St John's flight of five locks and waited again to get through the first one, but after that progress was fairly swift. The Rangers were again in attendance at the top to caulk up the gates and so prevent loss of valuable water. As I made my exit from the top lock, the engine refused to respond to the throttle and I naturally thought the propeller blades were choked up yet again, but the Morse control was very slack and after lifting the deck board, I could see that the throttle lever on the injector pump was not responding, so the cable had broken or come adrift. Unfortunately, it was the former, so here I was stranded miles from any chandlery and no means of propulsion, although thoughts of a jury rig were already crossing my mind. Several boats passed by asking if I was OK, until Brian on nb Whisper offered me his spare cable, which I accepted with grateful gratitude. Not long after, another Brian on nb Zavala offered me his old cable too, so I was being inundated with them. It took about an hour to replace the cable and get under way again, but there was still a problem.

The gearbox was not engaging until 1,000rpm, which was causing the engine to dance about violently on it's mountings, so after mooring up at Brookwood Country Park, it was up with the deckboards again to investigate the reason why. I am still not sure why this occurred, but I found that by increasing the length of the adjustable gear lever inside the Morse control, the gear lever on the gearbox would engage gear at just above tickover speed. Problem solved and another step up the learning curve. In retrospect, I think the old system of speedwheel and reversing rod, would be much more robust and reliable than cable, but I also need to carry a spare cable in future.

The day ended with a visit to the Hunters Lodge in the pleasant company of Dick and Brenda and Carol and Phil. Being Good Friday, the place was quickly filling up and we were very lucky to get a table so quickly.
Posted by Oakie at 07:55 2 comments:

At last, the full length of the Basingstoke Canal was finally opened to cruise on Thurs 28th March 2013 by the Byfleet Boat Club and anyone else who cared to apply for this Easter cruise. With thanks to Surrey and Hampshire County Councils who committed £5.6 million to restoration and the Basingstoke Canal Society, who applied the pressure.
Although the canal was restored in the seventies and opened in 1991, it has suffered serious neglect since, with little or no money injected into it's upkeep. However, here's hoping that the cash injection will now encourage boaters to make full use of it and clear the silt that makes it so shallow in places. 48 boats had applied to take part originally, but several dropped out at the last minute and as the Thames was on red boards, it was impossible to come from afar. About 12 boats were moored at the boat club overnight and we set off for Woodham Junction about 9am. It took me an hour to get through Lock 1 after the preceeding six boats and I thought that this would be the pattern for the rest of the trip, but the boats naturally spaced out as we went. Needless to say my Axiom propeller picked up a bladefull of rubbish before I even got out of the first lock. Fortunately, I had come prepared with a newly constructed prop cleaner, so no need to roll up sleeves and get my hands and arms in the dirty cold water. 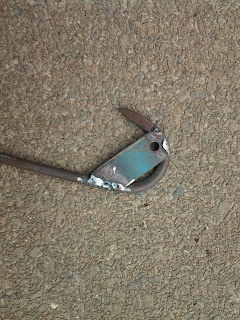 
I was in the company of Dick and Brenda on nb Nancy Bell and we completed the Woodham flight of 6 locks without waiting in any queues, although the locks were against us of course. Having small outlets to the sluices made filling very slow, but we got to Bridge Barn Hotel, our first overnight stop, in three and a half hours. Boats ahead of me were moored four abreast, so there was no through passage, but there did not need to be, as no boats were moving on this stretch of water, apart from ourselves. Tug 'Finch' arrived just before dark and breasted up alongside. The engine sounded like a Bollinder, but was indeed a hot bulb Petter - very unusual and totally new to me. 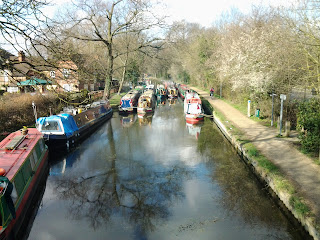 Moorings at Bridge Barn.
Posted by Oakie at 06:16 No comments: