I was expecting rain and it didn’t take long to start, so here I am steering in the rain, one thing that I promised myself that I did not need to do on this trip. I thought of going as far as the village of Willoughby, where there is an old thatched pub, called The Rose Inn. Having just looked up the menu on the net, it looks like I missed out on a treat. http://www.therosecountrypub.co.uk/  f course it was still raining when I got to bridge 87 and there was a half mile walk across the fields to get there, so I gave it a miss.

Continuing to the next winding hole after the Barby Straight and the new Barby Marina, I decided to carry on to The Old Royal Oak, which I discovered is one of the Hungry Horse chain, so not really my thing. Imagine my surprise to find Mouse Daltry’s newly painted boat Mika moored at the boatyard adjacent to the pub, so I texted him for an opinion on the pub and he confirmed my worst fears. 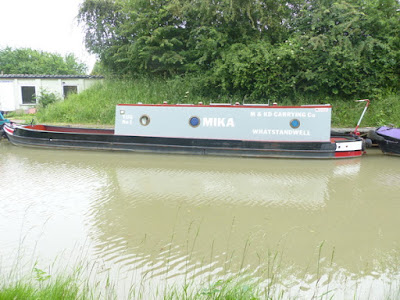 'Mouse' now owns this boat outright. It was a shared boat initially.

So, onward then as far as Hillmorton Locks, where I intended winding and retuning to a mooring somewhere along that stretch. Just before I got there, I saw a moored boat with the bow in the middle of the cut. On slowing down, I discovered that the boat was not reversing as normal, although the blades were revolving. Going forward was not a problem, so an investigation was imminent. The first thing, after mooring up, was to check the propeller down the weed hatch. All was well and the large domed nut was still holding the prop tightly on the shaft. I then had a look at the gear change lever on the gearbox and realised that the clamp holding the outside of the cable had slipped along it’s fixing bar. With a little adjustment I got it right at the second attempt and all was well. What it needs is a couple of cable clamps either side to the fixing clamp on the round bar that is visible in the photo. Midland Swindlers here I come. 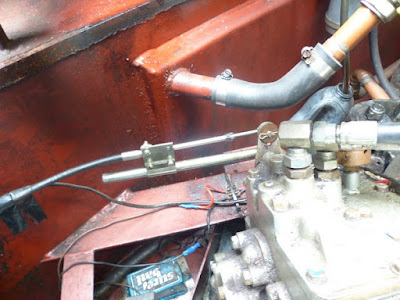 The clamp at the end of the cable coming in from
the left had slid along the bar below it.

Lunacy prevailed and I continued to Clifton upon Dunsmore, where there was a winding hole and where I finally turned around and headed back to Hillmorton for the night. Not good moorings here though, because the bank has sloping stone slabs at the waterline and every time a boat passes, however slowly, Stronghold bounces off these rocks, despite big fenders and spring lines.

Another overcast and windy day, so not very promising cruising weather. I set off up the last two pairs of locks and discovered by chance another string to my single locking technique. Stepping off the boat at the bottom steps as previously described, I drew a ground paddle to stop the boat before hitting the top gate cill. This time, to my surprise, the water now flowing into the lock caused both bottom gates to close, thus saving me the walk down there to close them – result. 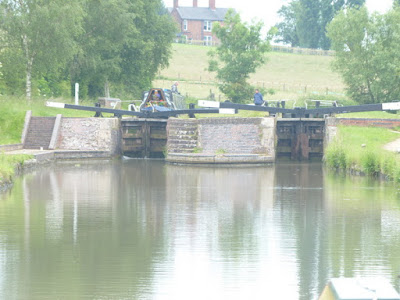 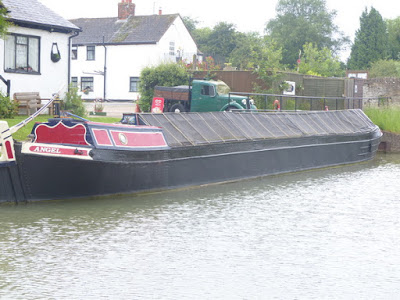 'Town Class' Harland and Wolff butty Angel moored here and up for sale at £33,000.
You don't even get an engine for that price!

I carried on to The Old Royal Oak and moored up on the pub moorings, hoping that I could connect to their wi-fi, which I did eventually after finding out The Cloud will only allow two devices to be connected to their system – that took a while to discover!

I have spent three hours writing this and posting it on the net. Is it worth all that time I wonder?
Posted by Oakie at 14:57

It's worth every minute IMHO:)

Thank you Kevin TOO. Good to know you are reading it and welcome to the happy band of Stronghold Supporters. Ray