I was watching BBC news in the morning and there was Carol Kirkwood presenting the weather forecast from Canalway Cavalcade, so I had to take a look. I took some pics from the road above and when she had finished filming, I walked along the quayside to take some more pictures. She was chatting to Mark Saxon, the water space manager and then there were a few photo opportunities for onlookers. When she had two CRT guys standing either side, I said, “I know these two guys, but who are you?” Which raised a laugh from Carol, even though I still had my trousers on!
The boat handling competition was still in progress and I watched their performances. Fulbourne being 72ft long had great difficulty turning 360 deg in the pool and so did the other boats; one even turning the wrong way round. They also had problems reversing to the judge at Warwick Avenue, so I knew by that time that I had done better. I was standing close to the judge by the bridge and when he opened his pad to score the last boat, I managed to look over his shoulder and see that I had scored 8/10 for his section, whereas the others had scored only scored 6’s and 7’s.

More chats with boaters and getting some advice from Paul Garner about protecting boat paintwork from the constant ravages of mooring lines. Then it was back to Stronghold for some lunch, before the prize giving at 1pm. I was right in the middle of cooking an omelette, when I had a phone call from Mark Saxon, asking me to be on the Horse Bridge in 20mins, saying that it would be well worth going, so I knew then that I was up for a prize of some sort. In fact it was the Westminster Trophy for The Best Handled Boat at Canalway Cavalcade, along with a bottle of Prosecco and a shield to keep. My dream had been realised at the second attempt and I was chuffed to bits. 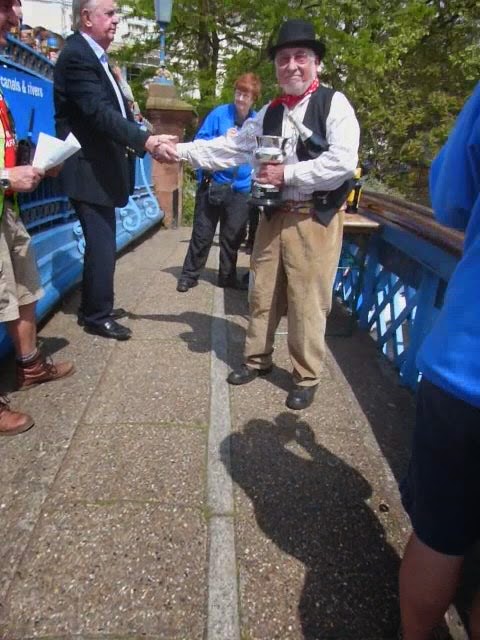 The evening was spent celebrating my win in the Warwick Castle in the company of Mike and Jenny Moorse, who were also NBT members and whom I met two years ago on the Oxford. Their boat is Guelrose, which I took note of previously, but there never seemed to be anyone on board at the time. Another perfect ending to a perfect day for me.
Posted by Oakie at 15:41

Well done Ray - brilliant result.- It sounds a much better organised event than last year, and the weather looks brilliant too. Pity about the beer tent....

It is much better organised Phil. All boats of similar length breasted up along Delamere Terrace and all reserved, as it should be. No worries about the beer tent, The Warwick Castle is so much better!

Congratulations Cap'n Ray. We've obviously found our steerer for the "reversing the pair" section in the Braunston parade this year!