At last, the day dawned bright and sunny, though still windy. We were heading for Stone and were away before breakfast, so as to get as far as possible, having made up 4 miles on our target the previous day. 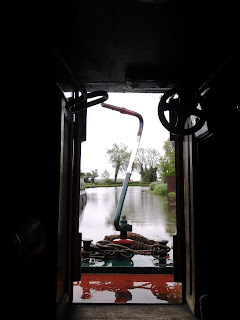 It was a very pleasant run, with a short shopping stop at Rugeley, before crossing the Trent, which was flowing fast after all the rain. The views improved along the Trent valley now that we were out in the countryside again and we had a good clear run to Great Haywood, with few locks to interupt progress. We had a problem mooring in Stone, as there were boats there for the full seven days and probably longer. We did manage to overlap the waterpoint slightly, but not block it by any means and as we were to be off early again, it did not inconvenience anyone. The Star beconed for a meal, which came with a free bottle of very acceptable wine, if ordering for two people. Now this really was a first class pub, even though it was a Marston's house!
Posted by Oakie at 08:07