Once again, I was back on board Nuneaton and Brighton, to take the boats from Alvecote to Braunston for the Historic Narrowboat Rally the following weekend of 29th/30th June. With more than 80 restored boats to see, not only moored, but also in the daily parade, it is well worth a visit. http://www.braunstonmarina.co.uk/Events/HistoricBoatRally.aspx

Barry Adams and I arrived at Grendon Dry Dock, where the pair of boats were moored after their blacking the previous weekend. The butty had to be winded manually, before we could hitch it up to the motor to take it the 3 miles to Alvecote to fuel up and try to seal up a water leak somewhere in the header tank on the engine before the trip. The pair were on cross straps, as they were unloaded and we were on a narrow canal.

We stayed the night at Alvecote and ate at The Pretty Pigs in the village, which was excellent value for a carvery at £3.99 and beer at £2.50 ish! We returned to The Samuel Barlow, as Barry was driving and met up with Graham and Becky, who were new NBT members and lived on a boat in the marina.

The following morning, Barry and I took all the connecting pipes off the header tank, made new gaskets and sealed them with silicon, before bolting everything back in place. Because a lot of the brass fittings were corroded down to very narrow mating surfaces, leaks were still evident and it all had to be repeated with much more silicon smeared around the joints. That was an improvement, but water was still mysteriously weeping out somewhere below the tank. However, it was good enough to travel and time was limited.

Steve Smith and Ian Palmer arrived, so we took the pair of boats up to the refuelling point and filled the tanks, before winding them, still breasted, in the narrow marina entrance. "A lot of eyes are on you", said Barry as I gently turned them, stern first into the marina entrance so as to take full advantage of the northerly wind. All went well and congratulations were accepted gracefully from my peers. If you cock it up, no one says anything!

It was very windy and as we had not taken off the top cloths, the wind affected the pair considerably when out of the shelter of trees. It takes about an hour per boat to remove the top strings, remove and fold the cloths before retying the top strings again to hold the top planks in position. All this would have set back our progress on the water, as well as having to cloth up again when we we arrived at Braunston.

It did not seem long before we were at Atherstone bottom lock and were up the flight of eleven locks in short order, with myself steering the motor and Ian and Steve bowhauling and working the butty and Barry flitting between the two boats, although I was abandoned for the last three to cope on my own. Maybe they thought I was having too cushy a time, but being used to working all the locks when out on my own boat, it was not difficult. In fact, I get out of routine when I do have a crew and just get on the bank and help, when I don't really need to.

We eventually reached Anchor Bridge, between Atherstone and Nuneaton, with The Anchor pub close by, so we moored up for the night. Barry and the other two were cooking up a meal, so I took a torch and had a look for the weepy water leak, which I eventually discovered around a drain plug. Finding a spanner to fit, I tried to tighten it. Imagine my surprise when the drain plug and surrounding metal dropped into my hand, followed by a gush of water from the tank, where a ragged 1 inch diameter hole had appeared! It was own up time to Barry, as he was captain on this trip. As usual, he took it in his stride and had a look at the damage, saying that it was better to have happened now, rather than when we were in a hurry, or even out on the Thames with no convenient mooring. Between us, we soon had the tank off, despite the difficulty of hidden and inaccessible bolts. As there was silicon to hand, all we needed was something to cover and patch the hole, but what? A tin of fruit salad was opened and the crew were force fed, so that we could cut up the tin can with scissors to make a patch. Some cable was found and stripped as ties to go around the tank and the repair was complete. It was left to set off overnight, as we had yet to eat and get to the pub before before closing time, which we did with 40 mins to spare. The tank was refitted the following morning, refilled and there were no leaks!
The following day, the header tank had the cap removed, so as not to pressurize the cooling water and it all worked like magic, with not a drip in sight, although a close eye was kept on the engine performance There was the usual detritus under the bridges in Nuneaton, but no hold ups, as there can be when the pair are loaded. We did have a slight hold up later though, when following three other boats, who were travelling so slowly, that we caught up with them on tick-over. We squeezed past the first one, much to the surprise of the steerer, then the next one, which was a hire boat and he looked surprised too. The last boat pulled over to let us past and was cursing the creep at the back for being so slow. I think he must have had a problem getting past him earlier.

We were soon at Hawksbury Junction and I wanted to steer the motor around the 180 degree turn at Sutton Stop, having seen so many other boats make a mess of it. There was some discussion beforehand about which cross strap to remove on the turn, but as steerer, it was my decision and I removed the strap off the inside dolly as before. Whether this is correct, I am not sure, but it seemed to work for me. All went well and I got the motor around in one, without reversing. However, the butty scraped the inside of the turn, but that was down to the butty steerer! I was awarded 9/10 by the captain and I was rather chuffed as it was my first attempt. As always, when all goes well, there were no gongoozlers outside The Greyhound. It's like wetting yourself in a dark suit ....... you get a nice warm feeling, but nobody notices! 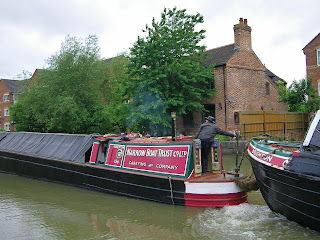 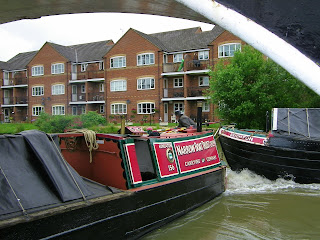 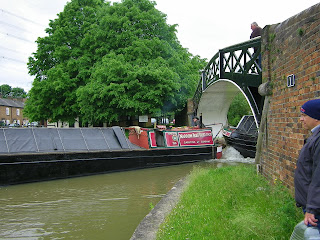 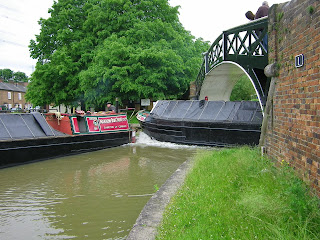 butty steerer counter steering to push me round........ 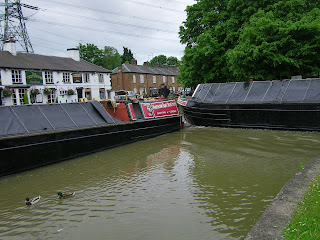 until home and dry. Where are the gongoozlers?
(All Sutton Stop photos by Barry Adams)

We continued on, without a stop at The Greyhound to celebrate, and were making good progress through Rugby and down the Barby Straight, when we approached a left hand bend, where a Union Canal Carriers hire boat was approaching in the opposite direction, with a group of pirates on board, obviously on a stag trip. They made no attempt at steering their boat and continued straight on, cutting across the canal and hitting Nuneaton with a resounding crash, pushing us even further into the bank than we already were, to try and avoid a collision. They all seemed to be speechless and no apologies were forthcoming as they continued on their merry way. Nuneaton's gunwhale had been pushed in by the impact by about 1 inch, although no internal damage was evident. It was fairly obvious to me, that the crew of the hire boat had probably taken over the boat at 3pm in Braunston, had about 40 minutes of basic instruction, before being let loose on their own, as they were approximately 1 hour out of Braunston at the time. 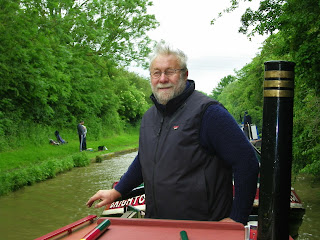 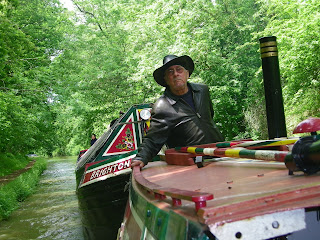 On the lookout for pirates.
(Photo by Barry Adams)

We arrived at Braunston an hour later and found a breasted mooring for the pair. The crew packed bags and we set off for home, looking forward to good weather for the following weekend.