My Maiden Voyage on an Historic Pair 3.

16th May 2011
Fenny Stratford to Startops End.
I was awake at 6am ready for an early start at 8. Mouse was also up early and brought me coffee at 7.30. We made a start on time in sunny weather and were soon going up Stoke Hammond Three locks at Soulbury just north of Leighton Buzzard, where we stopped to shop at Tesco, right next to the convenient moorings. A little further south at Grove Lock, I spotted David B, from the Wey Navigations, exiting the pub with a pint in his hand. I am not sure which of us was more surprised, as he was unaware that I crewed a pair of working boats and I did not expect to see him north of London.
Eventually we were approaching Marsworth (Maffers) Bottom Lock towing on cross straps as usual, but it was decided to breast up going through the several double locks. The butty was let go and pulled in to the towpath side, slowing all the time, while I tried to wedge it between the motor bow and the bank to pull it to a stop, after which we tied the pair together. I should explain that the butty, being of lesser draught than the motor, always moors bankside where it is likely to be more shallow and it also gives the motor a better chance of moving the pair the following day with deeper water beneath the propeller giving good 'fan hold' as it is known.
We repaired to The Anglers Retreat at Startops End, for a pub meal at last and very good it was too, all being home cooked while you wait – no fast food here.
17th May 2011
Startops End to Berkhamsted.
Early breakfast cooked by Trevor and a 10am start up the eight Maffers Locks. These locks are within easy walking distance of each other, so whilst the pair were in one lock, the crew were ahead setting the one above, which makes for efficient travel between locks and only one person steering the pair. Most of the locks were in our favour anyway, which means that they were mostly empty of water and only required the bottom gates to be opened for the boats to enter – known as ‘an easy road’. 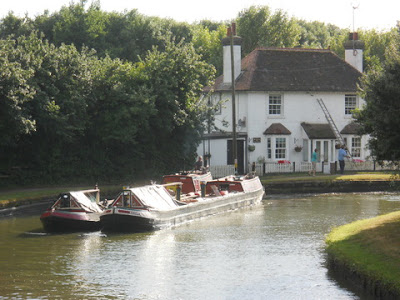 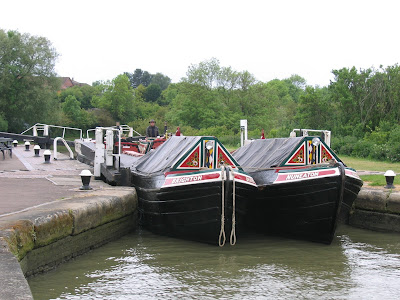 Usually this section is very popular with ‘gongoozlers’ walking the towpath and I should perhaps explain what a gongoozler is. It is a term first defined in print by E.R. De Sallis in his book ‘A Handbook of Inland Navigation’ (1901) as an "idle and inquisitive person, who stands for prolonged periods staring at anything out of the common." It was derived from the Lincolnshire dialect ‘gawn and gooze’, to gawp at something and was probably coined by the navvies who dug the canals.
We stopped beyond the top lock to fill the water cans from the new type of tap enclosed in a stainless steel enclosure. It has been designed for a hose to fit on the tap and was most awkward to fill a water can without a short length of hose. All the water on a working boat is carried in the brightly painted Buckby cans on the cabin top and there is no provision or room for water tanks in a hold for commercial carrying. 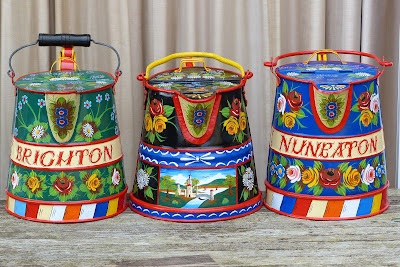 On reaching Berkhamsted (Berko), one of the crew was dropped off at The Crystal Palace pub to see what beers were on offer, before walking further to The Boat and The Rising Sun, so there was plenty of choice between them. Mooring just below the Rising Sun Lock, we ended up in The Riser, as it is commonly known for mild ale and Bateman’s Bitter after a recommendation from a guy on another boat. It was an excellent choice for beers, real cider and perry and snuff – 12 different types on the bar to sample, but no food. This was our treat after tackling the pair for a good clean up before we got to the show. 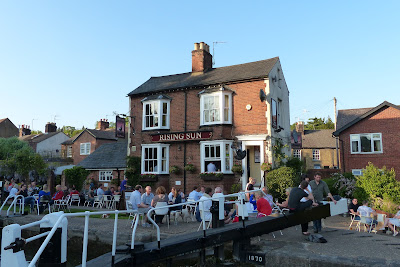 A busy day at The Riser.