I set off at the same time as nb Jasmin in front of me, but she stopped to water up by the pub close by. Reaching Claydon Top Lock I had had deep water in front of me at last through most of the pounds. The lady on the other boat caught up with me and helped by closing the bottom gates, which speeded both of us up. Once again I had forgotten about closing single lock bottom gates by using the cabin shaft and hooking the end of the boat hook under the corner of the beams.

Most of the locks were already full or there was another boat coming the opposite way, so I had a good road through Claydon five locks and for the remaining four to Cropredy.

There were two boats coming out of one lock and one of them was Anne on the Sea Otter “Double U”. I recognised the boat and reminded her that we last met up in Market Harborough Basin last year, when I was moored behind her boat.

The Cropredy Music Festival was due to be held on 10th  to 12th August, so I knew that moorings in Cropredy would be scarce. I was not hopeful of finding any and quite prepared to go on to Banbury. However, just below the lock were two 48hr moorings and they were vacant – success! I got moored up and so did the other lady on nb Jasmin, so I had the opportunity to thank her for help through the locks.

I had further ideas on fixing that half round table and found suitable timber and bolts to do the job, but only got part way, as the rain began. In The Red Lion, I met up with another couple of boaters who were here for the festival and sat with them for a chat. They live on their boat in the summer and have a house in The Canaries, which they go to in the winter – sounds like a great idea.

I lit the Cobb BBQ on the bow and cooked some water buffalo sausages, which were very enjoyable. Just in case you are thinking that it is dangerous to BBQ on a boat, the Cobb is so designed that it can be picked up with bare hands when hot. https://www.cobb-bbq.co.uk/

Guess what? It was raining again this morning after rain during the night. I had sealed up the lifting latch for the rear deck with tape previously to see if that stopped the rain from getting into the engine ‘ole and on lifting it with a screwdriver, it was still dry – another problem solved. The lady on Jasmin moved off this morning at 11 am and I am wondering how long before another boat moors up behind me, as spaces are at a premium here now. I heard that further down the moorings, the traders are jostling for bankside space, as being breasted up is of no use for trading.

Nb Herbie came past later and Neil stopped for a brief chat. Before another boat came along and he had to move on. Herbie was built by Andicraft, who also built Stronghold, so we had that in common.

I had decided to make some more Stilton Cheese Puffs  but discovered that there was no parmesan on board, nor in the local village store, so that idea was abandoned and I started more work on the bow well table fixing. All went well and the table is fixed, but with more work to be done to make it look better.

Barry turned up about 6.30 pm and we drove to The Brasenose Arms for a meal and a couple of pints, though Barry was driving and only had a shandy. It was good to see him again and we get on so well. The Brasenose is much better organised than The Red Lion and the food was good. There was also a better selection of ales on tap.

I let go about 10 am heading for Banbury, which was only 4.5 miles and 3 locks, but it took about 4 hours. The lift bridge in Banbury was awkward for me, because I could only moor the bow on the RH side to work the bridge, for another boat was moored on that side. The aft end was tied off on the other side, so the boat was secure. I put my hand on the cabin top and was stung on the little finger by a wasp I presume, because I didn’t see it. Half my right hand then swelled up, but it subsided after an hour or two. I watered up, before going through the lock to moor on the 2 day moorings. It is still quite a walk to Morrison’s, so I will move up there to the Tramway moorings tomorrow. Moorings in the shopping centre were all vacant on the LH side, although the other side was full up. Do they know something that I don’t?

It was a hot afternoon, so I connected up the car fan that I purloined in Braunston Marina launderette and it is ideal for this weather.

It was raining again this morning and seemed to have settled in for the day, although the forecast said it would be all over by 2pm. About midday, the rain ceased, so I looked up B&Q and it was on an industrial estate back over the little footbridge, so I set off for a gas refill for the little blowtorch. This can be so useful, not only for soldering, but for lighting the BBQ and the Morso stove in winter.

I walked back a different route from the towpath and stopped off at The Olde Rein Deer for a couple of pints of Hook Norton mild ale, which I sampled yesterday. Not only is it delicious, but it is only 2.8% ABV and ideal for a lunchtime drink.

I let go about 4pm to moved up to the Tramway moorings, which was very close to Morrison’s and just as I did so the rain began again, but it was a short shower and was soon replaced by sunshine. I trundled the wheelie bag over the bridge and filled it up with much needed supplies, as the last place I shopped was Rugby.

It was a blustery start to the day and continued making cruising uncomfortable. Passing moored boats could be a problem in this wind, because if I go too slowly the wind can push Stronghold on to them and if I go fast enough for that not to happen, then I get complaints about my speed – a no win combination!

There was usually one boat in front of me at the locks and sometimes two if the first boat was slow operating the paddles, which is totally unnecessary when descending a lock. Try explaining that to them and nothing changes at the next lock.

I got talking to a guy on the hire boat ahead of me whilst waiting and he was from Haywards Heath and a train driver who works Thameslink out of Brighton. Not only does he know Paul Heery, the ex-landlord of The Black Horse turned train driver, but also Chris Frederick, ex-revenue staff, who lives just around the corner from me. It is quite amazing how many people on boats live or work in my home area. Back at home, Roger, who owns the local hardware store, has a boat in Cropredy Marina.

Whenever I got to a lock with the crew on the hire boat, they always assisted my exit, which not only made the operation easier me, but speeded up my exit and for which I was very grateful.

I arrived in good time for a mooring at Aynho, just beyond the bridge and had a pint in The Great Western Arms, as always.

The air horn is not working well and probably needs a squirt of WD40 in the compressor to loosen it up a bit. I suspect that the wiring from front to back of the boat for that is causing a voltage drop anyway.

CRT have just renewed my licence for another 3 months automatically, despite my filling in their form designating ‘no automatic renewal’. It could be that I was in a weak signal area and they didn’t get it. However, I phoned them to complain and it was cancelled later after a call from them to say so.

I was about to set off this morning, when the man moored up behind asked if I heard the commotion earler, because the mowing gang had mowed along the towpath and a stone had smashed one of his hopper windows. That is the problem when the towpath is made up of stones rather than tarmac.

Once again I had help at locks by the hire boat crew, even though I was prepared with a long line to tow Stronghold out of Somerton Deep Lock. 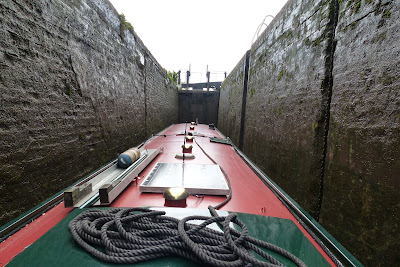 Somerton Deep Lock 12ft.
The long centre line on the slide was to pull to boat out.

At Upper Heyford and Allens Lock, I moored up to pay a visit to The Barley Mow and write it up for the database. It was quite a long walk up the hill and I took the wrong road, but it wasn’t far from the top. Not really worth a visit, although the home cooked food menu was good. Fullers ales of course, being a Fullers pub.

Returning to the lock after a pint, I was just in time to catch nb Dusty, with Kati and Jock on board, so we had a conversation, mostly about pubs on route and I asked for a diesel fill up when they got through the lock. It appeared that they are taking their other boat nb Confederate onto the Wey Navigations later in August for a holiday, so I showed them a Wey windlass on request and gave them a National Trust map of the river. I will be back on the Wey mid-August, so may well see them again. A very pleasant couple who were very easy to talk to.

The day terminated at Lower Heyford, which was interesting because it was one of Oxfordshire Narrowboats turn around days and three crews of single sex groups were getting instruction. The boys on two boats were all wearing sailors’ hats and looked ridiculous. I remember way back many years when single sex groups were not allowed to hire boats – how things have changed!