Summer Cruise 24. Back On Board.

I cannot say how happy I am to be back on Stronghold again, after a week at home, where every day had an objective to be achieved – and they were, day by day, until all were completed by midday on Sunday, so I was half a day ahead. Getting back to the boat, I found that either the inside hire boat had been hired out, or the boatyard had had just reversed her; anyway, the spring line was missing and the mooring lines were slack, consequently the old girl had been banged about by passing boats and several items inside were on the floor. I found the spring line inside one of the lockers on the hire boat, so whoever moored Stronghold up did not know how to secure a boat properly. While on the subject of mooring, have a look at ‘Moored Like a Twat’ on Faceache. I think it was originated by Maffi.

OK, rant over. I departed north towards Rugby, as I had to stock up again with food at Tesco, but there was enough to make a meal with tinned meat balls and potatoes on board for just such an occasion as this, as I can shop in the morning. I got one of the last moorings on the park side and close to the water point, so not too far to get to the main road. It is 6 pm and time for a well deserved pint in the local Harvester – oh dear!

It would appear that the summer has been and gone, because it was rain this morning and rain all afternoon, so not very conducive to going out, but there was a great deal of shopping to be done and nothing in the larder except tins of stuff. A lot of time was spent surfing the net, making a retail therapy list and reading. At about 5pm and bored stiff, I ventured out towards Tesco in the rain, although it wasn’t quite so bad then. I tried a new route through the housing estate, which seemed shorter, but probably wasn’t, although it did avoid a steep hill back up to the canal.

Another trip to the Harvester pub, which still had the Doombar clips on all three pumps handles, but what a surprise was to come....... it was off! This just goes to show how badly this pub was organised. A piss up in a brewery comes to mind! Being there, I was committed to having a pint, so it was San Miguel, but at the same price as Doombar. I have a good mind to complain to Mitchells and Butlers who own Harvesters – in fact I did:-
“This was my fourth visit to The Bell and Barge and on every occasion there were two choices of real ale on tap, which was take it or leave it, because there were Doombar pump clips on all three beer pump handles. On 11th July the beer was not on tap at all and pulled up cloudy, so I had no option but to drink San Miguel. For such a large establishment, this is not what I expect when I go out for the evening and if smaller pubs can deliver a choice, then so can you. For this reason I have no intention of visiting The Bell and Barge again, nor any other Harvester house in the future.”

I did get a reply, but it was the standard type of email that they would send out to anyone who complains. No offers of any sort were forthcoming, not that I would accept them anyway.

It was all change with the weather again this morning with the sun shining through the clouds. How different from yesterday.

I phoned The Greyhound at Suttons Stop, but Saturday night was full in the restaurant, so it has to be an early ‘grab a table’ time in the bar on Saturday evening, or even eating outside if the weather is OK.

The moorings here are filling up fast and as they are OK for 14 days there are many boats here for that time, while opposite, the moorings are for 24 hrs only. A lady opposite asked if I was moving on today, as her husband had a hospital appointment the following day and needed longer than 24 hrs mooring.

Everyone seems to be on the move here at Rugby. It must be because of the clement weather after yesterday’s constant rain. At 12.30, boats were passing me in queues ether way and there was even a queue for the water point opposite. It is always amusing to see hire boats getting the stern in first, or reversing with the bow way out in the middle of the cut and no way of getting back onto the mooring. This really is a spectator sport and they often don’t appreciate unsolicited advice.

After a period of tidying up and a bite to eat I let go for Newbold and the other boat moved across immediately. It was only a half hour trip, but long enough to warm up the engine for an oil change. I have got this down to 20 mins now, although it takes a bit longer to tidy up. Getting rid of the old oil is a problem on the waterways, but it will keep until I get back to Braunston, where there is an oil disposal tank in the marina.

A cool start to the day with no wind, which is always appreciated when cruising. This is such a quiet spot for mooring, although there are houses just below the towpath, but their roofs are level with the canal, so you don’t hear much noise. There is NO TV signal here, despite turning the aerial this was and that. I wondered if the water had got into it after all the rain.

There is an unvisited pub at Ansty, called the Rose and Castle, which would be good to have on the pub database, although I shall be going past this morning, which is too early for pubbing - maybe on the way back. Having just looked this pub up, I see that it is more of a restaurant than pub, with table service.......mmmm?

When I got to Rose Narrowboats. I decided to take a walk up the arm to take some pics of repairs done to the NBT pair. Rose Narrowboats were OK for me to moor up for a while on their refuelling mooring, while I went for a walk along the towpath. Sure enough Nuneaton was close to the yard and overplating was obvious with new blacking applied in the appropriate places. Brighton was moored up in the winding hole with a new gas vent cut and some work done to the stern. I had a chat with Steve Priest, wondering if a boat I had spotted was for sale for a friend of mine, but the answer was no. 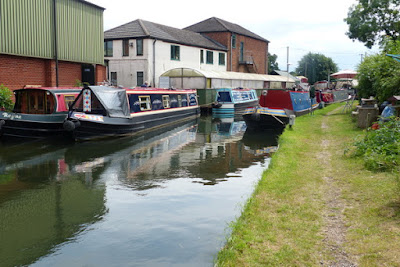 Cruising on, I passed by the Rose and Castle pub gardens, but the pub itself was not visible and I did remember where it was, having passed by before. Mooring is on the towpath, which is on the opposite side to the pub, but there is a bridge close by.

I arrived at Suttons at 4.30 pm and there were no moorings available on the Oxford canal, but around the corner on the Coventry I spotted a place for two boats and immediately made headway for it, knowing that if I stopped for water, it would be taken by another boat, as happened to another boat watering up. At 6 pm boats were still arriving and looking for moorings.

Trying out the TV aerial here, I found that there was nothing wrong at all and I got a perfect signal. Wi-Fi is excellent too, with a five bar signal.
Posted by Oakie at 10:24