I pulled the pins later that morning, having been on this mooring for 48hrs and set off further north, although I didn’t get very far when it was time to stop for lunch.....yes, I do that now just for a break. Looking at the map, I realised that I would not make Kilby Bridge until late, because there were twelve locks to tackle before then. Had there been another boat going the same way, I might have taken the opportunity. However, there was a convenient mooring about 300yds further back, with a gate to a footpath that led to Fleckney village and a tempting pub which, it turned out, sold Everard’s Tiger. The footpath was across a large meadow, originally ploughed in the medieval ridge a furrow method, but the presence of the footpath had levelled out the land where it crossed, which must have taken some years to do. The sun was shining and birds singing and all was right with the world and I was reminded of my childhood experiences in Wiltshire when I was evacuated during the war.

Now it was time to tackle those locks to Kilby Bridge. Still no boat going my way and it was to be the hottest day of the year so far. I had to stop and set every one, as they all leaked out of the bottom gates. I met a few boaters going the other way and one even came up to help me through, dropping his new steel windlass in the cut as he crossed the top gates. I volunteered to fish it out with the magnet and picked it up first time, for which he was very grateful.

There were a few free moorings at Kilby Bridge and as soon as I tied up I was off for a pint at The Navigation, which was extremely welcome on such a hot day. I had a chat with a lady from a cruiser about shopping places in Leicester and the secure mooring pontoon there, which is gated from access to the general public. She also stressed not to go outside the park in the evening if moored there, because the park is locked at sundown, which caught her out. I discovered later when I did moor there, that she could have got back in to the park through just one of several gates, using a waterways key.

There are another eleven locks between here and Leicester, so today is deemed a day of rest, as it is forecast to be even hotter than yesterday. Fortunately, the wind has changed and the all pervading smell of slurry spread on the nearby fields is now blowing in another direction.

I spent the hottest part of the day touching up paintwork below the gunnel where other boats had scraped down the side, most leaving their paint behind as evidence. I also retouched the blacking on the rubbing strake, which was peeling off because it had been sprayed on top of rust. Another nail in the coffin of MSO Marine’s shoddy work. I have found that wire brushing the rusty parts and painting with Fertan cures that, before finally painting with the two part epoxy black, which adheres very well to the surface. I crossed to the services side of the cut to do the other side of the boat as well as fill up with fresh water, after which I had to quench my thirst at The Navigation.

It was time to pull the pins and move on, despite the heat. There appeared to be several boats about to depart that morning and one of them caught up with me shortly at the first lock. They wanted to go through with an accompanying boat, but I persuaded them to go turn and turn about, so that I always had another boat for company. That worked for a while until another boat joined in, there now being four boats, so we continued as I originally planned all the way to Leicester through eleven locks, which in most cases were in very poor order, often with only one paddle available to fill the lock. 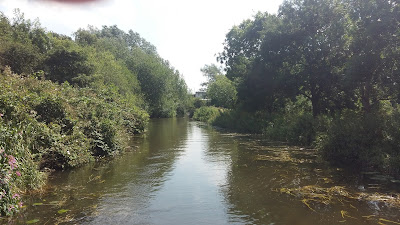 From this stream on the outskirts of Leicester to....... 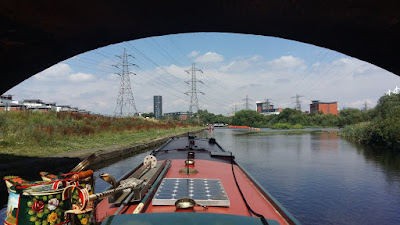 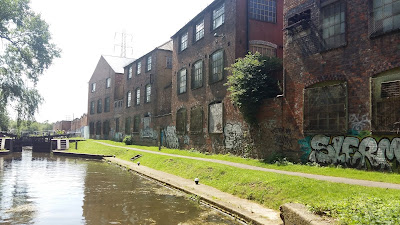 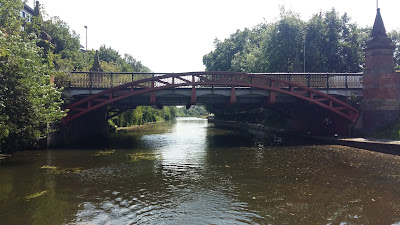 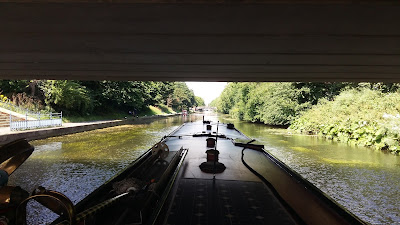 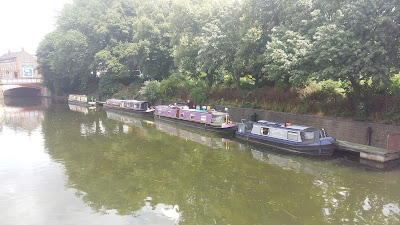 We both moored up near Tesco to stock up, as I was totally out of food. I then moved further on to investigate the secure mooring pontoon adjacent to Castle Gardens. Fortunately, there was one mooring space available – my lucky day.

I awoke to find that Stronghold was the only boat left on the pontoon, but by 11.00 it was filled up again and later in the afternoon another boat was breasted up to Stronghold. I decided that the chance to visit the cathedral was too good to miss, beginning with a long coffee break at Wetherspoons. £1.00 for a good mug of coffee and as many refills as you can drink – it is no wonder that this chain is so successful, with cheap food and ale, the pubs are always full to capacity every lunchtime and evening. How other pubs manage to keep going with their high priced beers is beyond understanding.

I had a good look around the market, where there was a lot of bargain fruit and vegetables on offer close to lunchtime. There are several very old houses in this area and a free grammar school for boys founded in 1877. I can’t remember seeing so many restaurants and take-aways in such a small area. I reckon you could eat in a different establishment every day of the year in Leicester.

The cathedral was small and perfectly formed in comparison to other cathedrals and of course the main attraction being the tomb of Richard III, having been recently re-interred in 2015. 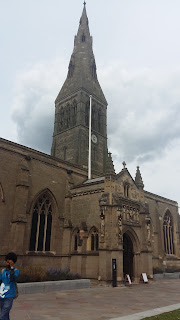 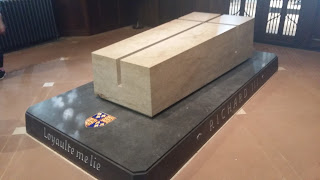 A very interesting and compact city to visit and I am pleased that I did, despite the heat of the day.

I had spotted a Spar store on the other side of the river in one of my old copies of “The First Mate’s Guide”. These booklets were very useful in the past, but are no longer published, because the authors took their boat to France. They were written by Carole Sampson and her husband when cruising on mv Sulaskar, a narrow beam Dutch barge. I met them once in Limehouse Basin and still have a ball point pen that they gave me. The booklets gave all sorts of useful information about shops, doctor’s surgeries, dentists, post offices, etc at various stops on a particular waterway - I digress.

Anyway, I took a stroll in that direction and came across an enormous Tesco store hidden away behind The Black Horse pub – I wish I had known about both yesterday, instead of wandering aimlessly around the restaurant district. As expected, this Tesco was full of Asian and Polish foodstuffs and would have served my purpose admirably in the search for some curry flavoured sauces.

On getting back to Stronghold my young live-aboard neighbours did not appear to be out of bed at 10.30. I did and engine check and started it up, which caused a flicker of curtains and eventually they made an appearance to move their boat and allow me to move out.

One thing that I nearly forgot to mention at this point is the colour of the water beneath the boat, which is pitch black. According to Nicholson’s guide it is due to the deposits from the dye works that have been in existence in Leicester since the year dot, so it is not the water that is black, but the bottom of the River Soar and it extends for several miles downstream, whereas half a mile upstream from where I am moored, the water is clear to the river bed.

It was not so hot today, so was a little more refreshing cruising in a mild breeze. The locks are well spaced out, so not too strenuous and I was surprised to meet a volunteer lockie at Birstall Lock, where I stopped for a pint at The White Horse; a very well appointed pub.


At last I was on a long straight stretch of river after a few miles of twists and turns and found moorings close to Hope and Anchor Bridge. Just like other rivers in the UK, there are designated mooring places only, as the river banks are mostly overgrown with vegetation.

I walked up to The Hope and Anchor, only to be disappointed to find that it was a Hungry Horse establishment, complete with a queue for the bar, just like the last one. One pint was enough for me here.

I walked up to The Hope and Anchor, only to be disappointed to find that it was a Hungry Horse establishment complete with a queue for the bar, just like the last one. One pint was enough for me here.

Another red hot day in store and another attempt was made to post my blog on personal wi-fi, but gave up in despair – will try the next pub I come to.

A light breeze kept things cool on the river and I had forgotten how lovely the Soar can be – wide and deep, but still black in the depths.

Getting low on diesel now – well less than half a tank, but there are several boatyards along the river. I eventually came to one at Sileby Mill and filled up there at 68p/litre and no declaration, probably because it was from a moored boat. I wonder if this tax declaration will be phased out now that we are no longer in the EU. Nothing ever seems to be done about it anyway, so it has been a total red tape farce by the European Parliament and as usual in the UK we all do as we are told.

Another mile further on, I came to Mountsorrel and pub moorings. There was one free right at the back end, so I reversed hard, just avoiding a wide beam boat moored in front, when a day boat came around the corner saying that the mooring was theirs. “I don’t think so,” says I and shot in towards the bank, so they had to moor on the lock landing instead. 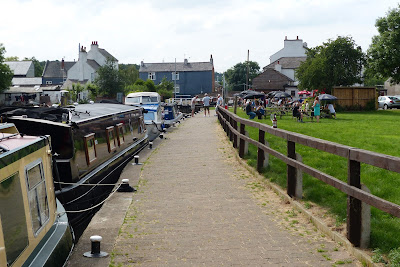 Moorings at The Waterside Inn. 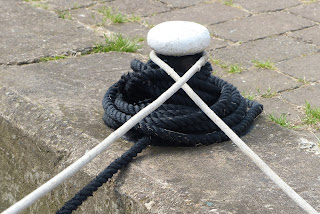