A fairly early start into Braunston Tunnel. All went well for a while, before a boat came towards me for a long time with the light shining straight in my eyes. As I passed I told him that, to which he replied, “What are you going to do about it then?”  I told him it was up to him to do something about it, which led to a string of invective, most of which I did not hear. People like this are either ignorant of the etiquette, or just plain selfish. For those who don’t know, the headlight should be pointing up to the roof of the tunnel, or down on the water. I suppose even to the nearside wall would be OK too.

I took the turn at Norton Junction on to the Leicester Arm of the GU, through very pleasant countryside inhabited mostly by sheep. After a couple of miles Watford Locks came into view. I only had to walk up one length to book in with the lockie, who told me to go through two locks and wait in the pound for another boat to exit. After that, the lockie saw me through the next lock and then the staircase three, before I coped with the final one. A very smooth operation, as there was no queue at the bottom, so no waiting. 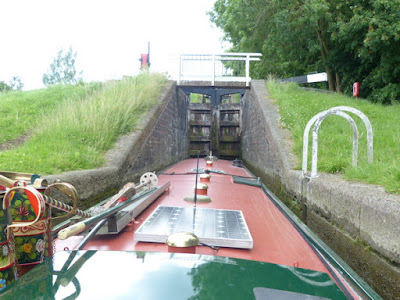 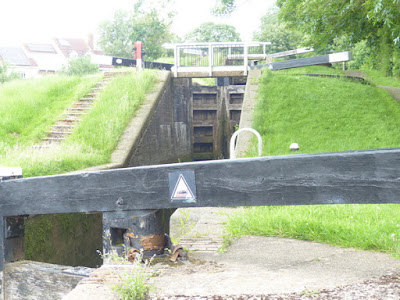 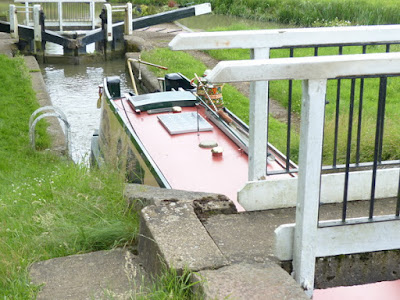 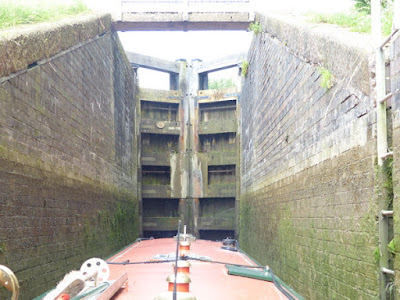 Cruising on, I found some piling to moor up to for a coffee break. For a short stop like this, I use a piling hook with the centre line tied to it with a bowline, which I find to be very secure. Just for an experiment, I thought it would be worth trying a rond anchor in place of the piling hook. 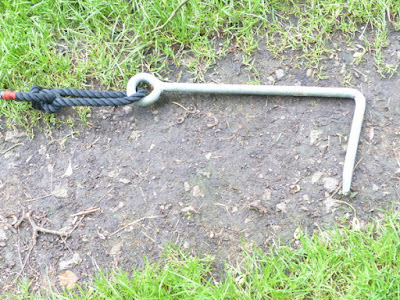 
The sequence goes like this:-
1.    Tie the rond anchor to the end of the centre line with a bowline through the eye.
2.    Come in slowly to the bank and stop the boat.
3.    Drop the rond anchor into a gap in the piling.
4.    Step back on board.
5.    Put a tiller string/s on to keep the tiller straight ahead.
6.    Put the engine into gear just above tickover speed.

Several advantages are gained using this method:-
a)    There is no fiddling about trying to get the curved piling hook in.
b)    Because the rond anchor is at the end of the centre line, it is close to the steering position.
c)    A bowline is not only secure and quick to tie, it is also very quick and easy to undo.
An important point: do not try and stop the boat like this. 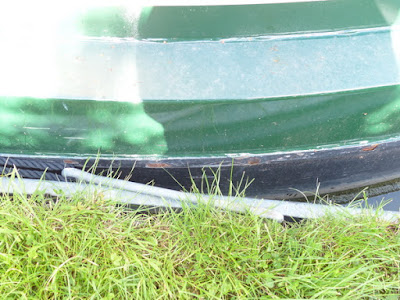 The rond anchor in the piling.

I also found this method beneficial when mooring up. Do the same as detailed above, before walking forward along the bank  to moor the bow end up with a mooring and spring line, before attending to the stern end. All in all, this is going to make mooring to piling so much faster and easier, because the other end of the boat is not drifting off the bank and little effort is required.

Someone gave me these two rond anchors a few years ago and up till now, I have not found a use for them. I wonder why I have never thought of this before - it is so simple.

I watched another boat pass as I was drinking coffee and was amazed at the stupidity of some steerers, who sit on a high chair on a trad stern, with the tiller under her arm. She only had to reverse for an instant and if the rudder caught on an obstruction, she would have been in the cut with chair and sucked into the rotating food processor with dire results. I wish now that I took a photograph. No idea of what a dangerous situation she was in.

I moored up almost opposite Crick Wharf, but found out later that there is a BT Hotspot on the wharf, so should have moved closer to get a signal.

I had a mild stomach upset this morning from the Spanish chicken that had been in the fridge too long and had not been brought to the boil before eating, so was feeling a little under the weather and decided to have a lazy day for a change. I moved the boat a little closer to Crick Marina to get out from under the trees and while I was there Debs came walking along the towpath. She is friend of Maggie’s and we met at The Boathouse in Braunston recently. She came in for coffee and a chat and shared some olives and flavoursome cheese just bought from the deli at Yelvertoft.

A leisurely afternoon before paying a visit to The Wheatsheaf, where I made good use of their wi-fi and a new brew on called Black Pig, which was similar to a porter. I also got talking to a boating guy at the bar, who knew where The Pelican pub was at Addlestone – small world really.

Oops! I seem to have lost a day somewhere. I wonder what happened to that? That is what happens when out on the cut – you lose track of time and because I am writing this in arrears, one day blends in with the next.
Oh well, I shall carry on!

Time to move on again, hoping to get to Welford at the end of the arm. I had been here once before on a hire boat, but so long ago that I can’t remember much about it, except to say that it was raining at the time.

The summit pound between Watford and Foxton is over 20 miles long, so no locks to break the journey. With the gentle throb of the engine and little to do except steer, I felt myself nodding off, so had to stop for a coffee break. The weather was not up to standard for this time of year and there was a cold north east wind blowing, so I was dressed in several layers, including a scarf.

I discovered that I now had a phone signal and phoned Union Wharf at Market Harborough to see if they had a mooring for a week. Yes they had, but I had to be out of there on Thursday. I declined the offer as it was too much of a rush and needed to have a rethink.
The Welford Arm was next and very quiet, with no other boats passing. Only one lock to do at 3’6”, where a queue suddenly formed of three boats, Stronghold being the second one, which secured me the last place in the basin.

I enquired of boaters in the small marina here as to who to contact for a weeks mooring here and was given a phone number, but the manager was at a steam fair for the week end, so decided to wait until Monday to ask.

Another excellent and enterprising pub at Welford – The Wharf Inn. Being Friday evening, the bar was well populated with punters. A good choice of local beers plus Pedigree on offer. I tried one that was recommended by two guys at the bar, which was very hoppy and citrusy, then went on to another one that was previously Ruddles County, but had been revived by Ruddles brewer after the company folded. Food menu looked interesting, but I have too much on board to eat before I depart for home. 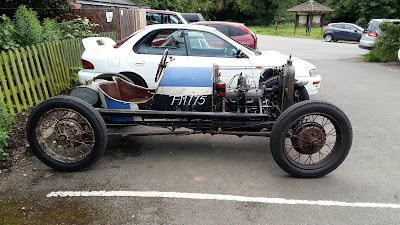 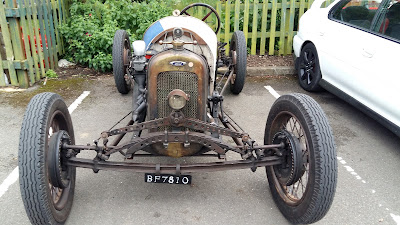 Only one headlight. Is that legal? Drum and rod brakes, just like my first car. 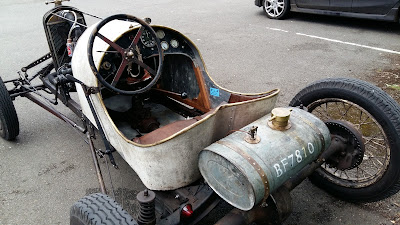 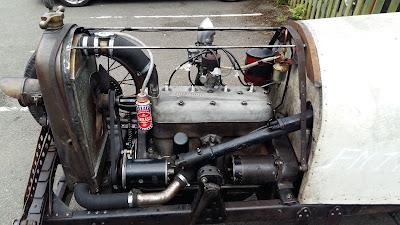 Seen in the car park of The Wharf Inn. An American side valve Ford with a Winfield head. Did the new head come from Woolworths then? Modern Brasso tin, but he is not having mine with a metal cap!

Clear blue sky this morning and no wind for a change. The weather man forecast the beginning of summer and about time too.

There was now a vacant mooring in the small basin right at the end of the arm, so I winded outside the dry dock and very gently reversed in beside another boat. Not only closer to the pub, but almost in range of a BT Hotspot, located at the front of the pub on a BT pole.

I find it interesting watching boats wind in that basin, because space is very limited. As often with noddy boats, it’s full ahead/stern or stop – only two speeds and just as I did many years ago. This time I got the boat at right angles to the bank before stepping off the stern with a line and pulling her round. No noise and soon done. 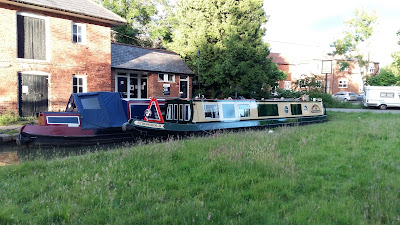 The Wharf, where they unloaded chalk and loaded limestone
from the nearby lime kilns. The Wharf Inn is in the background.

I walked around the to the marina office to try and book a weeks mooring, but no one there again. However, there was someone working in the nearby dry dock, so I knocked on the locked door and a guy appeared from within. We went round to the office and after a phone call to his boss, I got a bankside mooring for £30 - not bad, considering a marina mooring several years ago was £80. I moved the boat up there shortly afterwards and found that I had a TV signal to boot, so an added bonus.

Much of the afternoon was spent tidying up and clearing the decks of all removable items. I had a steak and kidney pie left in the fridge from the Braunston butcher, which was now six
days old, so I decided not to risk it and eat in the pub, which was a good choice. Plenty of options on the menu and the beef and stilton pie hit the spot, with carrots that actually tasted of carrots.

I have ordered a taxi to take me to the station tommorrow morning; all done by email. My next entry on here will be in a weeks time - see you all then, lovely readers.
Posted by Oakie at 14:11

Like your use of the rond anchor Ray, although I'd be careful to drop it into the piling immediately before a bolt securing the piling to the shuttering as I can imagine it jamming well in if there's any give in the piling.