My Maiden Voyage on an Historic Pair. 7

Heavy rain preceded another sunny day. I had previously collected the car from across the cut to go in the official car park and was able to easily offer Mouse a lift to Ricky station, with him praying that there were no engineering works to stop him getting his connection from St Pancras on time. That left Barry, Keith and myself to show the boats. Again it was another busy day talking to people interested in the pair and trying to make it as interesting as possible, without going on too long. It was encouraging to find some visitors really interested in how the boat families lived in such a confined space and worked the pair of boats.  I found also, that as time progressed  my introduction became better and more concise. I found it relatively easy to answer questions, having read so many books on the subject.

A late lunch cooked by Barry of bacon steaks, eggs and mushrooms was enjoyed by all, before we set to work to close up the boats at 4 pm. The information displays were removed and top planks positioned on the stands before the side cloths were unfolded and tied over the top planks to keep both the top planks in position and side cloths tight These were then covered with the top cloths and tied to the gunnels to keep the hold water-tight. This is a considerable amount of work and there is some skill in tying the strings to keep them taught and using the correct knots to do the job. It has to be done by at least two crew and as Keith left at 3pm, it was all down to Barry and myself. 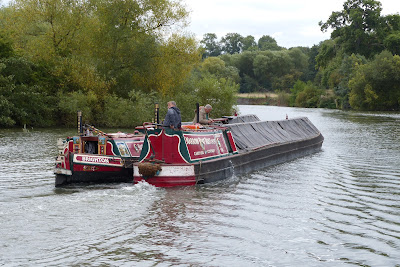 It had been a physically demanding, but very enjoyable week and of course there were periods to recover in between the activity when steering, or waiting for the boats at locks. Steering the motor boat involved about 90% concentration, but steering the butty involved only about 10%, because the steerer was only responsible for the direction of the stern. The fore end being entirely directed by the motor steerer. Like most activity on the cut, it is a case of learning the routine in a series of events and once that is grasped, moving on and learning a new technique. On this trip Trevor signed me off on double locks both up and down, as well as steering the motor and the butty in my training book, which every NBT crew member is issued with when they join. All the techniques are listed to be completed and when a book is full, the member is eligible to be proposed as a captain, provided that a first aid course is attended and a YHA Helmsman Certificate passed.