After checking a few facts about the buildings at Sutton Stop and then publishing my blog, I let go, having decided to cruise down the Coventry Arm to visit Tesco, close to the Ricoh Stadium. Another boater had told me about it previously and indicated there was a mooring on the off side, which he used when he shopped there. The visitor moorings , such as they are, are on the towpath side just before Bridge 8, but the bridge cannot be seen from these moorings, so best plan is to go as far as Bridge 6A, where there is a winding hole, turn and return to the Armco mooring just above Bridge 8. It is then just a short walk over the bridge and down the Foleshill Rd. to the Tesco store, which is enormous, but if you know Tesco, this one is laid out the same as the rest of them. I think I found the offside mooring, which appears to be well trodden, but I imagine the distance to walk to the store is about the same as the one I was on.

I had a leak in the secondary fuel filter, which had dripped onto a paper tell tale placed underneath. I was tempted to release the filter and twist it to re-bed it on the rubber seal, which would mean all that bleeding through to the injectors again, which I was very reluctant to do, but I noticed a drip from the top union by chance and tightened them up further, which I hoped would solve that problem. Sure enough, the tell tale showed no further drips at another check.
By now the time was getting on and I returned to Suttons and found a prized vacant mooring just above the lock at 3.30pm, having decided to stay here for the night. 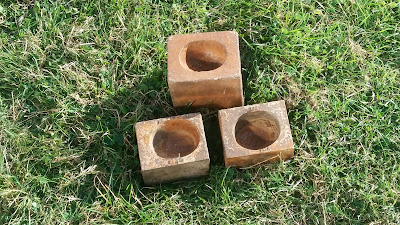 Any ideas what these are?
They are cast iron and close by the Toll Office at Sutton's.

Thinking about the Coventry Arm, there have been considerable changes since I had been down it about 10 yrs ago. There is now far less detritus in the cut and no plastic bags, so I had nothing around the blades, as expected. A great deal of house building has taken place on brown field sites, so it is far less industrial and in some places, quite rural. Needless to say, I was impressed and quite tempted to travel as far as the Basin on some future occasion. 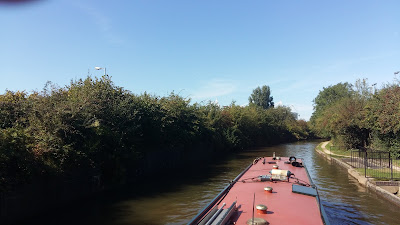 Quite rural along the Coventry Arm.

It was a chilly morning with my breath condensing in the air and only 10ºC inside the cabin, but the forecast was for a fine and sunny day of about 20º C, which is ideal cruising weather and it turned out to be true.

Although it was time to move on towards Rugby, I had to do the usual engine checks and top up the tank with water opposite. While that was filling, I went to see if there was anyone at the Toll House, because I wanted to know about the cast iron weights that I saw there yesterday. Sure enough, there was a volunteer on duty and he informed me that they were the sockets at the bottom of the hinge pins of lock gates, so another problem solved.

Finally departing at 11am, it was nearly 12 miles to Newbold and took 4 hours on an uneventful trip, stopping just above All Oak Wood to make a sandwich and hot drink. I made coffee as I was travelling, by using the rather laborious Italian style stove top coffee pot.This time I used an alternative method of using a coffee bag in the cup, which is far quicker and less messy. I have to admit to being a coffee snob and refuse to drink instant coffee, unless it is offered by someone else, when it would be churlish to refuse. However, this Taylors coffee in a bag is very good, although rather expensive for the amount that you get.

Finally reaching Newbold, I found a mooring at 3pm, although there were not many vacant spaces and at this time of the year, I did expect more. Having moored up securely, I had a pint in The Barley Mow and a snooze after the exertions of the trip.

Not much going on today, except for moving into Rugby Wharf this afternoon to finalise the agreement to take the mooring on for a year, which we will do on Monday. I am quite looking forward to a change of scenery, mooring and meeting new people. Also, being off line, there will only be hire boats passing on their way to and from the base at the end, as well as a few coming in for fuel etc,

There were a few sunny spells this morning, but by midday it had clouded over, but there was no wind and the day was still quite warm.

I did some touching up of the paintwork now that the boat was moored with the damaged side to the bank and surprisingly, the paint was still liquid after a few years, but there was no catalyst as that had gone off  a long time ago, so I will have to rely on time for it to harden.

I set off for the wharf at 3.30 and was soon there. I winded at the end of the arm, but the mooring allocated to me was occupied by another boat, so I had to moor in the only available space on the off side, which was beneath a tree where I moored a couple of years ago.

Whilst winding, I had a word with one of the occupants and later came up to introduce myself to Margaret and Dave and a little later to Lisa. They assured me that it was a very friendly community and there were several live aboards there, looking out for each other and the boats. I was quite buoyed up by that as I thought it would be so. I also had a few words with the couple on nb Sultan, who live here and are still working. Several Willow Wren boats were now moored up for the winter on the towpath side, which were not there previously, but I had been warned of this previously in the office, so I might not be able to escape easily in the winter months, although I did not move last winter on my Wey mooring, except to get water.

A 360º view of the Arm can be seen here:- http://www.rugbywharf.com/photos.htm