This is something I started seriously last winter after a few attempts from the book on the subject by Anne Young. Since then I have read Tony Lewery's book 'The Art of The NarrowBoat Painters' and purchased the Phil Speight and Tony Lewery videos on the subject. If that wasn't enough, I started photographing historical work from Stoke Bruerne Waterways Museum and any other boat painting that I came across when out on the waterways. I nearly forgot to mention that there is a lot of other peoples work in the internet.

I have to say that the more boat painting I see, the more I am able to form opinions on what I like and dislike, bearing in mind that a lot of the older work was created in a limited timeframe whilst the boats were being blacked, caulked or otherwise repaired, so it was done very quickly out of necessity. 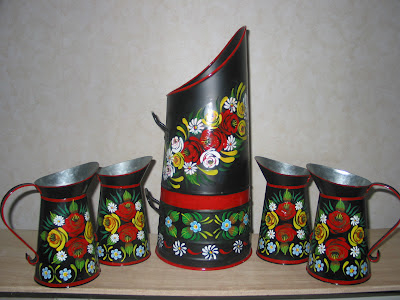 After some feeble attempts on card trying out petals and leaves for roses, I jumped in the deep end with some tinplate jugs, bought cheaply in an Asda sale, which I thought at the time would do for presents one day in the future. The coal hod came with my boat and certainly needed some brightening up. I also had a galvanised bucket on board which was to accept my first effort with a castle scene. It was virtually painted by numbers from the Phil Speight video, but turned out reasonably successfully. 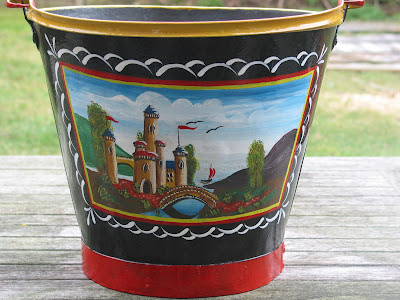 I have used a variety of paints, starting with Humbrol in those tiny tins. One thing in their favour is that they don’t skin over like paints in larger tins, which is a problem I have yet to find a solution to, although I have thought of adding pebbles to the tin to keep the level up and exclude the air. Any contributions to solving  this problem would be gratefully received.

I have invested fairly heavily in brushes, but still often find that I don’t have the right brush for the job. It has always been my aim to have the right tools for the job and there is no doubt that this makes it easier to achieve success.

My latest project is to decorate a 4 gallon Buckby Can, which I bought at a well known chandlery at the bottom of Buckby Locks. Much to my surprise, it leaked like a seive when filled with water and by that time it was too late to return for another one. It takes a long time on a boat! Although I told them what happened, the chandlery did not offer any part refund and said that they were probably only made for decoration (almost certainly in China). However, I did managed to soft solder the base and it’s now fit for purpose and ready for some paint. Again it was painting by numbers, because it was a long time ago that I did the bucket.

Here it is with the castle scenes partly completed. There still is a lot more work to be done. 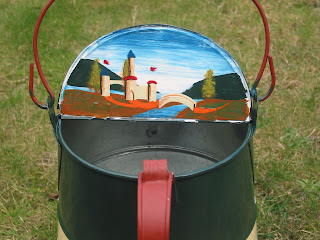 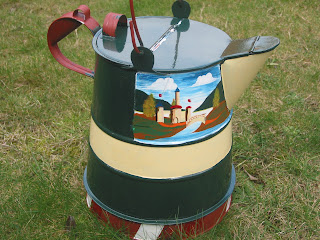